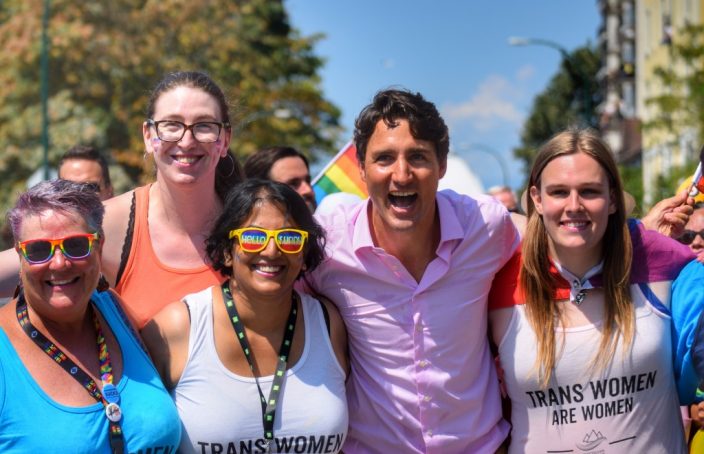 Really it was an awesome article…very interesting to read. We provide a tour for LGBTQ& HANDICAP-PLEASE VISIT OUR WEBSITE

The Vancouver Gay Pride March! What a fun and exciting day! We’ve known for months that we’d be visiting Vancouver on a house sit during their 40th Anniversary Gay Pride Parade celebration, but what we didn’t know were if the rumors that Justin Trudeau, the very easy-on-the-eyes Prime Minister of Canada, would be joining as well. 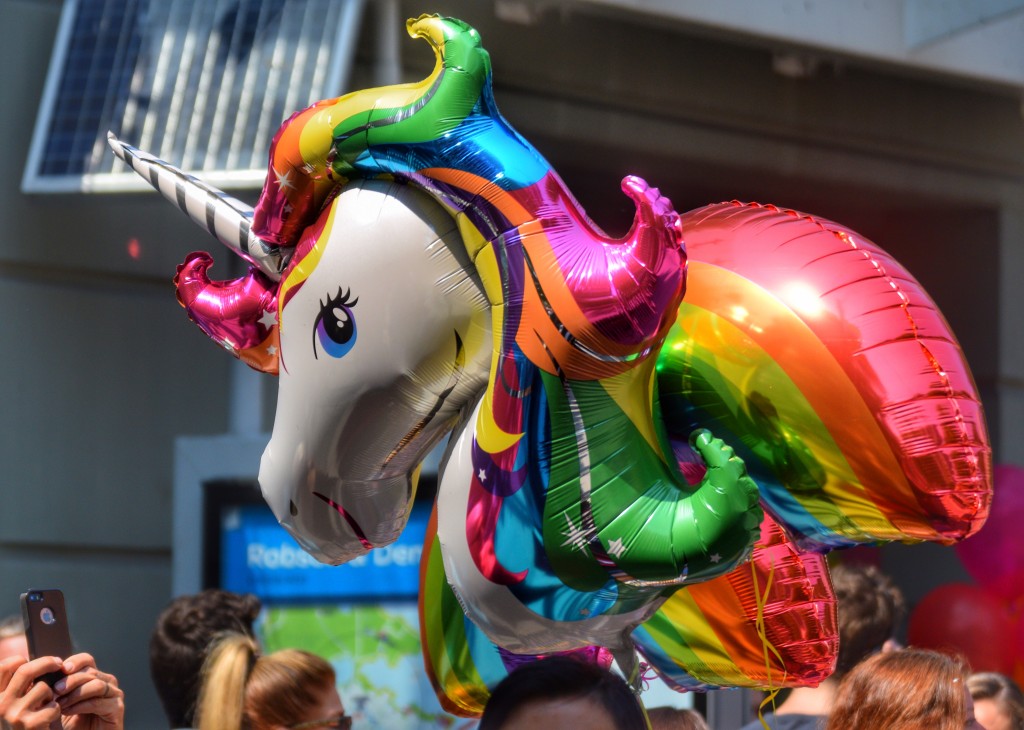 Because a Gay Pride Parade that draws over 650,000 spectators isn’t something to miss, we did our due diligence and applied in advance for press credentials (because I love taking behind-the-scenes photos!). However, the date was fast approaching and we still hadn’t heard anything from the Vancouver Pride Society about our credentials. It was almost a case of “let’s just go and enjoy the parade and don’t worry about it moment”, but on Friday afternoon Cheryl sent just one more email to check up on the status. The response was quick and apologetic as most things in Canada are – “We’re sorry your request must have gotten lost. We’ve been looking at your blog and we love it. Can you make it to our office before we close today at 5pm?”

Public transport in Vancouver is a dream to those of us who live without access to it at home. Bus to Skytrain and we were downtown with plenty of time to spare. Meeting the huge, enthusiastic crew of the Vancouver Pride Society was a treat and we knew we were in for a great time on Sunday for the parade! 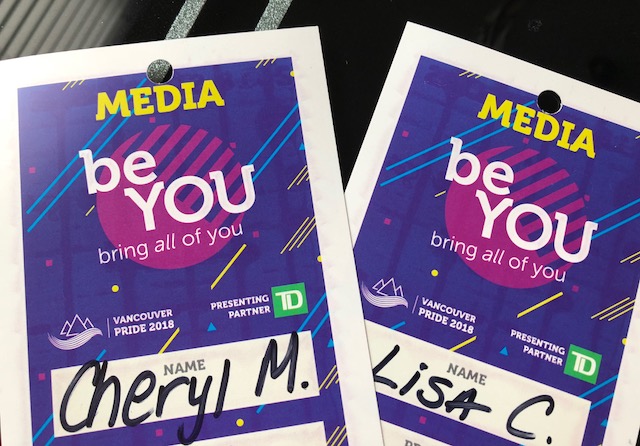 We planned what to wear and got ready for the heat wave (81 F) expected for parade day. One more serendipitous event on Saturday led Cheryl (see the pattern here?) to check the Prime Minister’s Press Page regarding his weekend activities. It hadn’t been announced that he would be walking in the parade yet, but she saw that he would be in Richmond (close by) on Saturday night, so the chances were good.

On Sunday morning she checked again and there was a message saying “all Pride accredited Press Pass holders should present themselves by 11am to be provided access to the Prime Minister.” Still not sure exactly what that meant, we hopped back on the SkyTrain and headed downtown so we’d be there at 11am to present ourselves.

Of course we were there early, so that meant walking the rainbow gauntlet of colorful parade floats in the staging areas. This year’s theme was “be you, bring all of you,” which invited people to participate, no matter their background, no matter their identities. That diversity was visibly represented by the more than 170 parade floats ready to take to the streets. 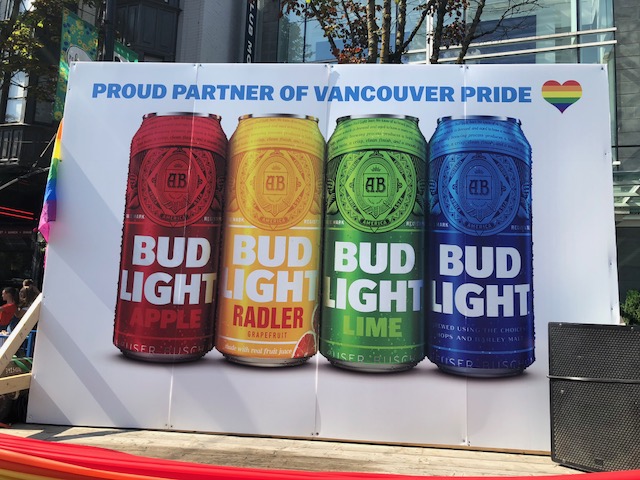 No one seemed to know exactly where the PM would be and many weren’t even sure that he would be there. Finally we found a small area at the front of the parade route that was cordoned off and went to ask. Here we met two young ladies of the PM’s Office Staff who invited us to join the briefing soon to start. There were only about 20 of us there – mostly Canadian TV and Internet, we were the only people from the United States.

After our camera equipment was swept by the sniffing dogs and we were quickly briefed on where to stand when Justin Trudeau would first arrive (they made sure everyone had a place to stand and a good view), it was time to chat with the other “reporters”. Thankfully we had a shady spot as it was starting to get warm before the 12 noon parade start. 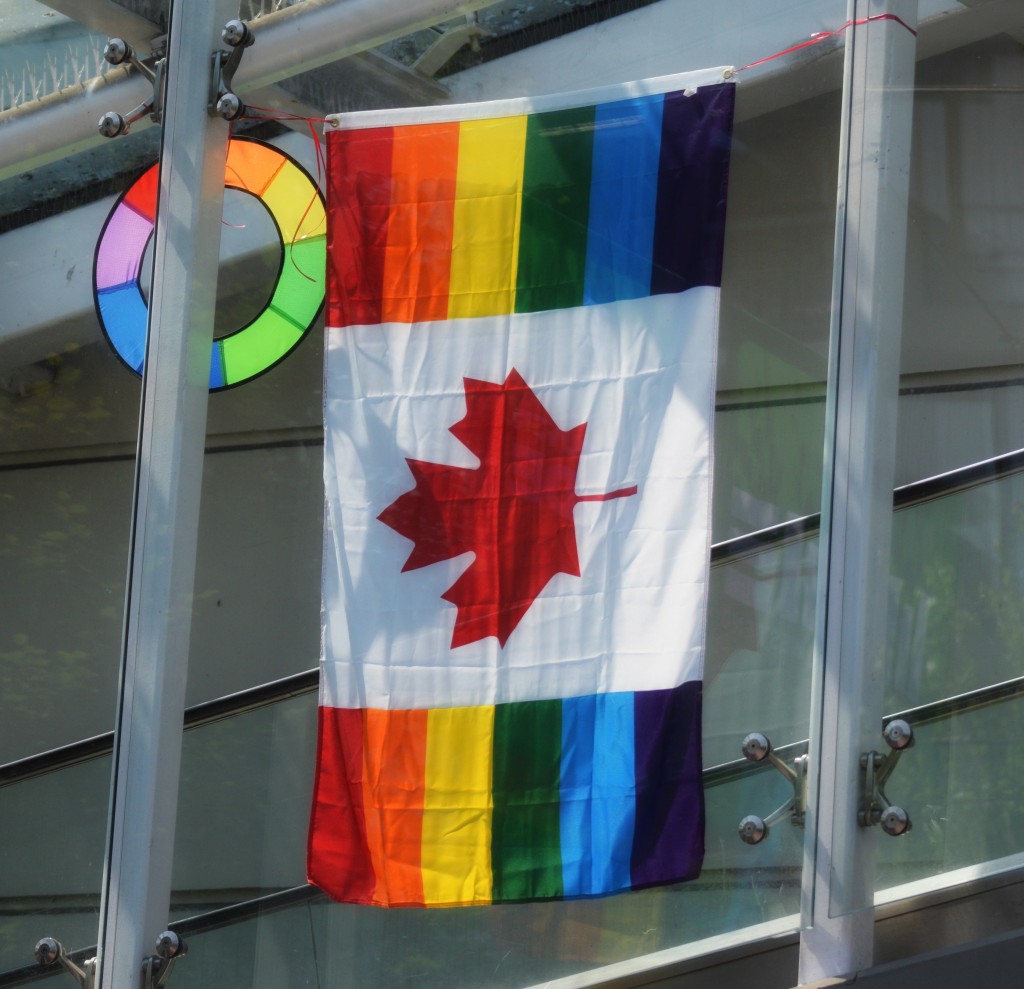 Justin Trudeau arrived right on time and took a few questions with the local reporters with lots of smiles thrown in. He looked as though he was thoroughly enjoying himself. He took several Q and A’s from the journalists in the “pen”…and yes, we could have reached out and touched him! 😉 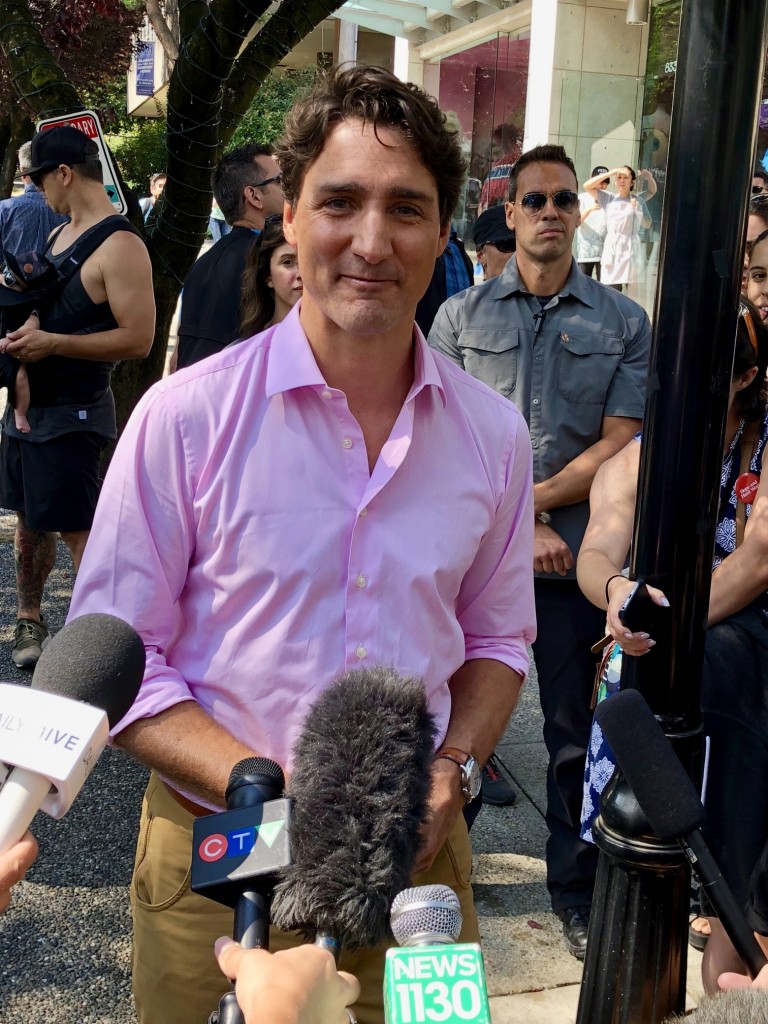 Bets were made among the other journalists as to just how long the PM would be walking in the parade…2 blocks? Maybe 3? His staffers quickly put that question to rest as they confirmed he would be walking the entire route (and so would we!). Our only direction was that we were to keep between the float just ahead of us and the PM and his entourage – and to take lots and lots of pictures along the way! We would be announced throughout the parade as the “International Media”. (OMG!)

We were ushered through the crowds and stepped out into the street beside the Prime Minister’s Security Team. Before we knew the parade was off and we were running backwards (backwards!!) snapping photos and collecting video. This was about the time that we realized we were walking in the Vancouver Pride Parade and what an honor that was (this was also our first time EVER walking in a Pride Parade!).

Shouts of “It’s Justin Trudeau!” rippled through the spectators and the cheers were incredibly loud each time the crowd caught sight of him in the parade. He was all smiles and shouting “Happy Pride” for the entire walk. I know because I was walking just in front of him much of the time to get photos and could see and hear the crowds roar when they first saw him. It was so exciting! 😉

Of course not every politician is going to be popular with everyone and every politician is human – but what a refreshing change to see so many positive and enthusiastic people wanting to shake his hand or have a photo with the PM. It’s been estimated that Vancouver Pride and related events bring about $23 million into the local economy. The parade came just two days after the provincial government announced its plans to create a human rights commission that will support gender equity legislation and LGBTQ rights. It was a welcome reception and a beautiful day for a Pride Celebration. We were so very happy to be a part of Vancouver’s 40th Anniversary Gay Pride Parade Celebration – and Thank You Canada for sharing Justin Trudeau!

Here are just a few of the photos we took (of Justin Trudeau!) capturing just a tiny slice of the spirit in both the walkers and the spectators for the celebration of the 40th Anniversary of the Vancouver Gay Pride Parade! 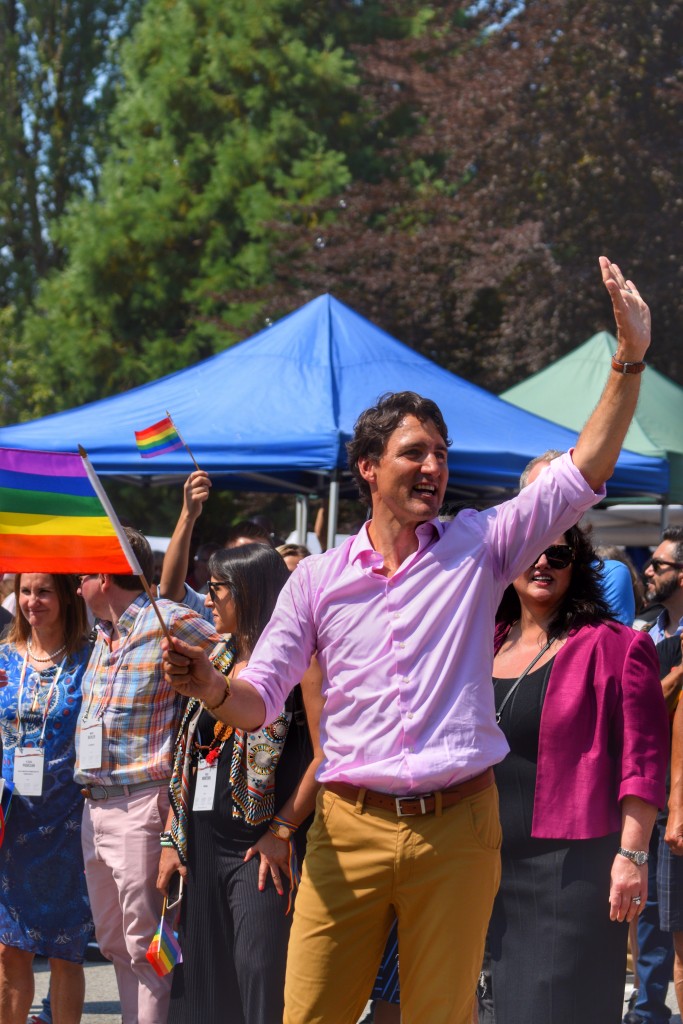 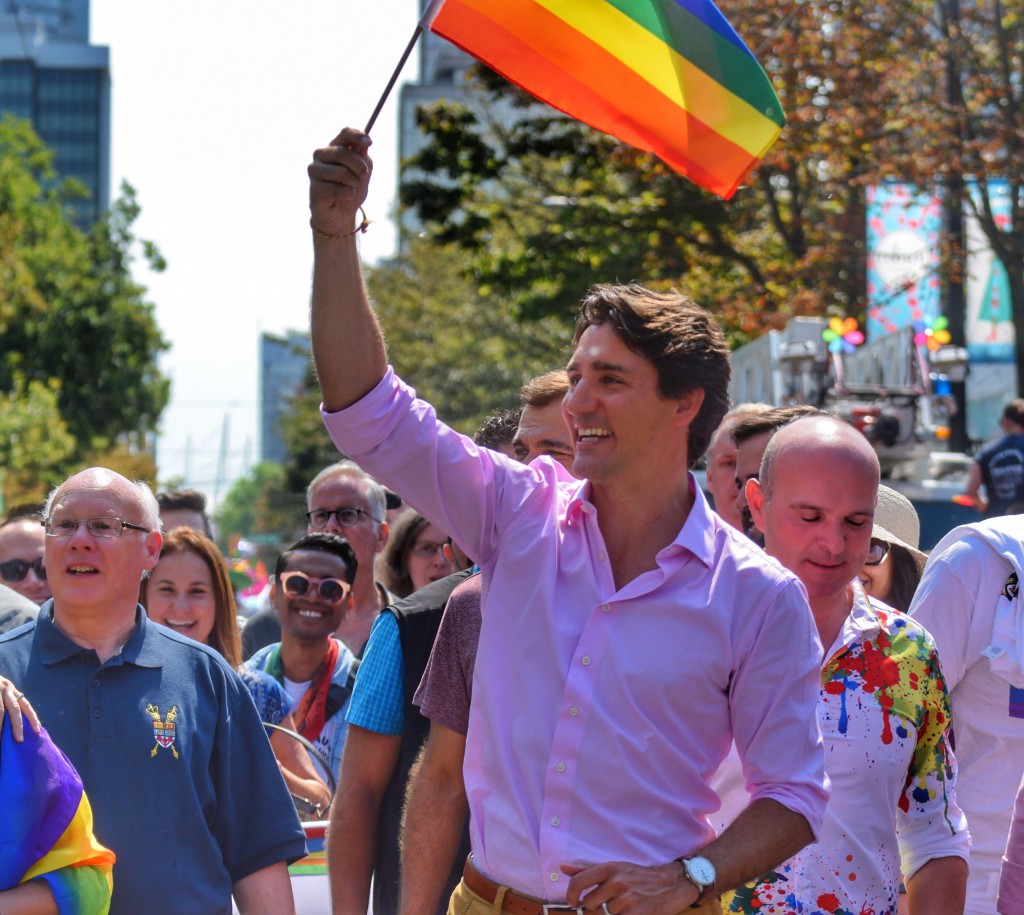 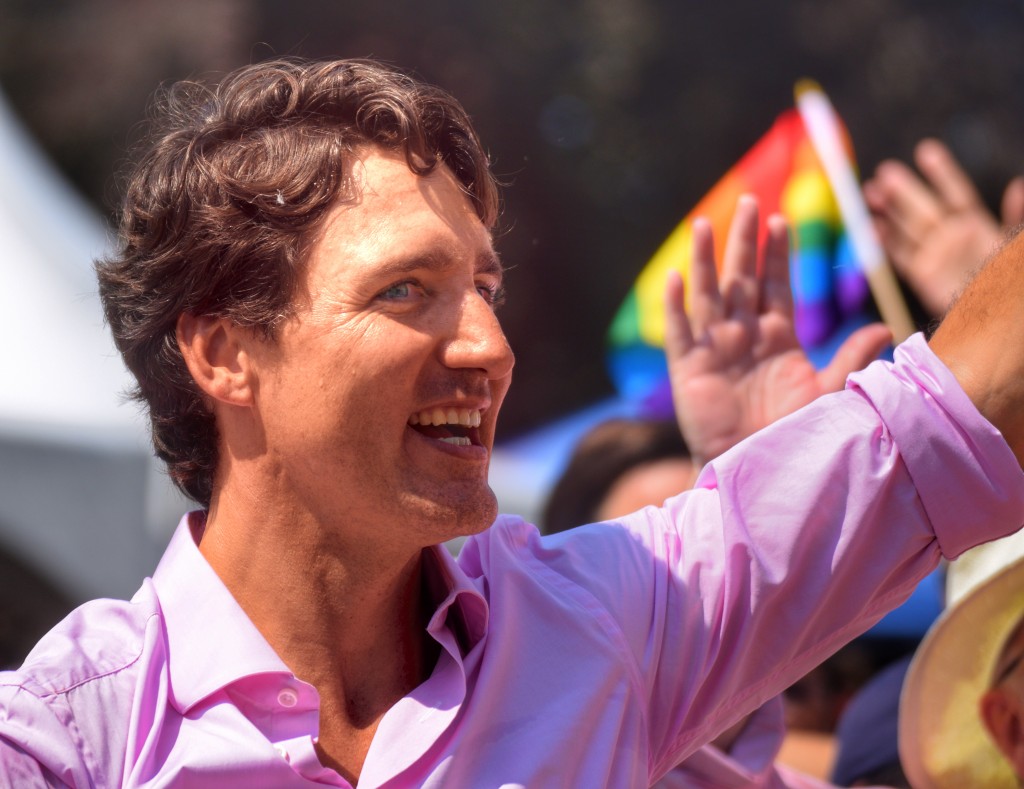 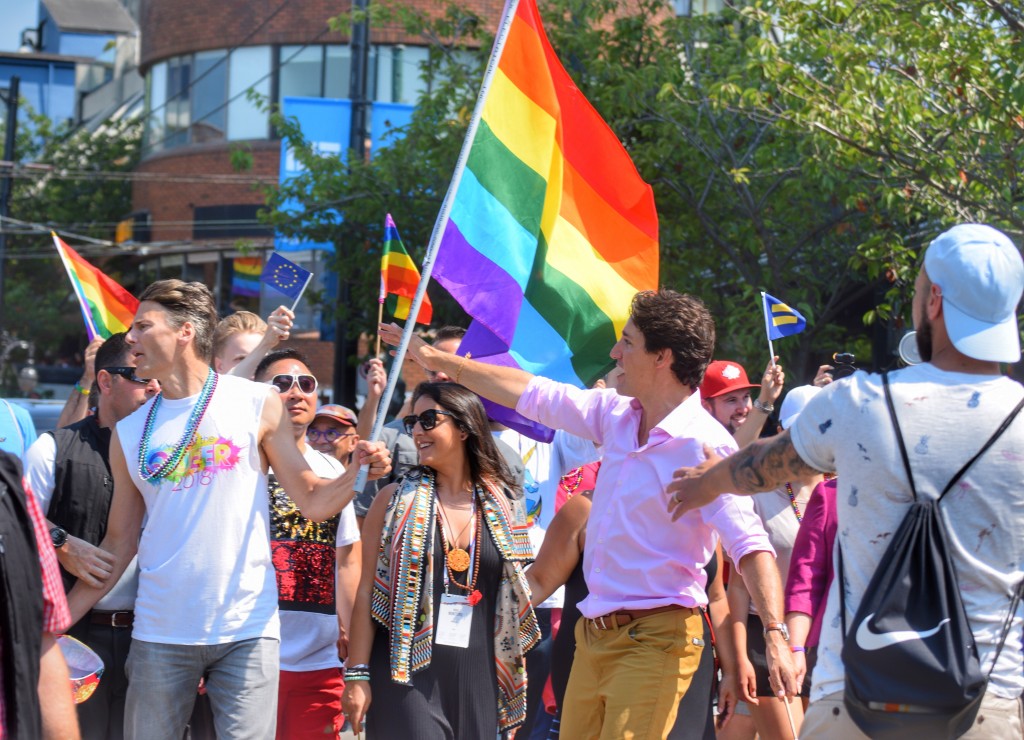 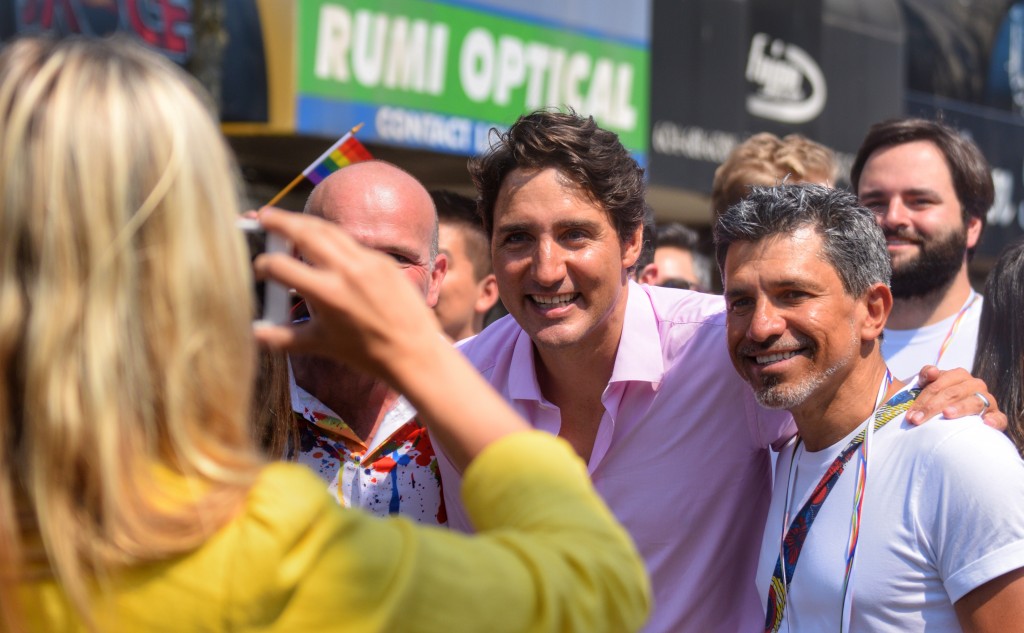 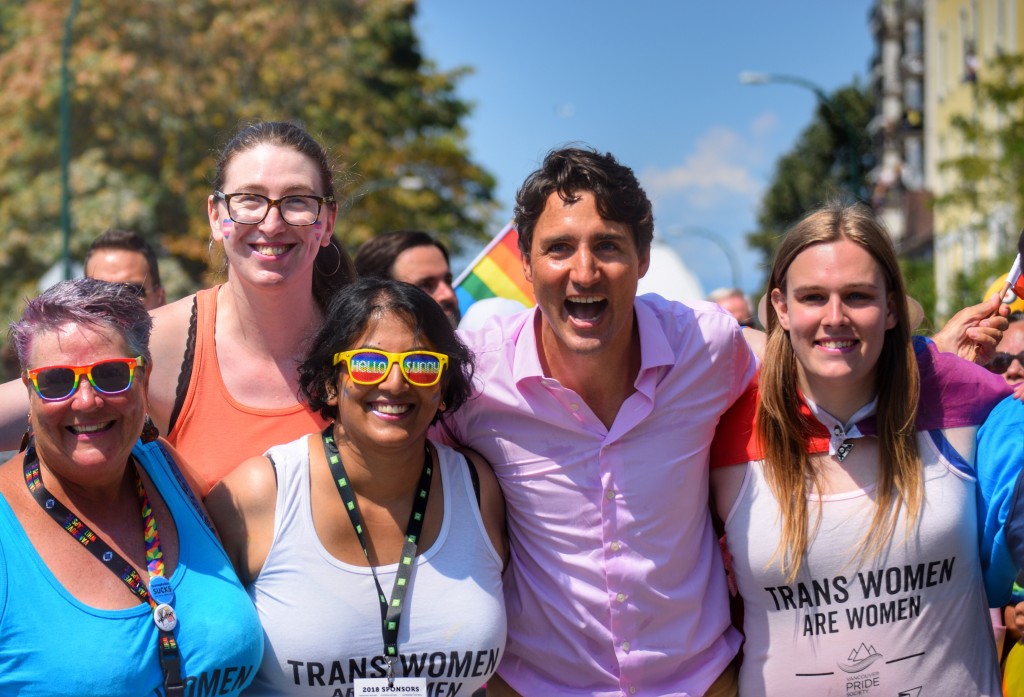