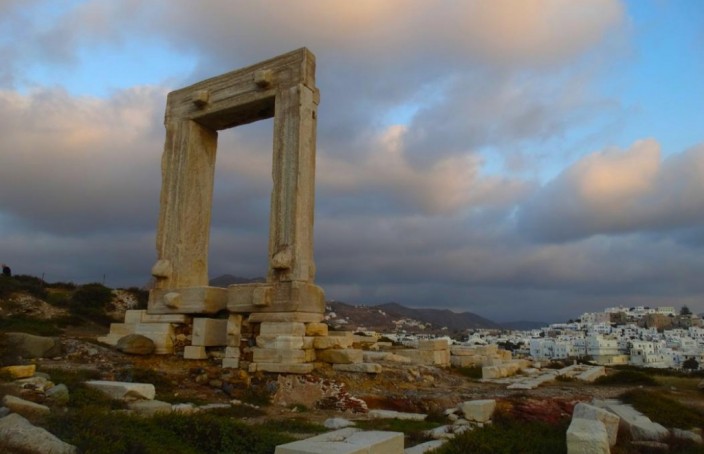 Naxos was definitely a pleasant surprise! We enjoy all of Greece, but something about the smaller islands always draws us.… 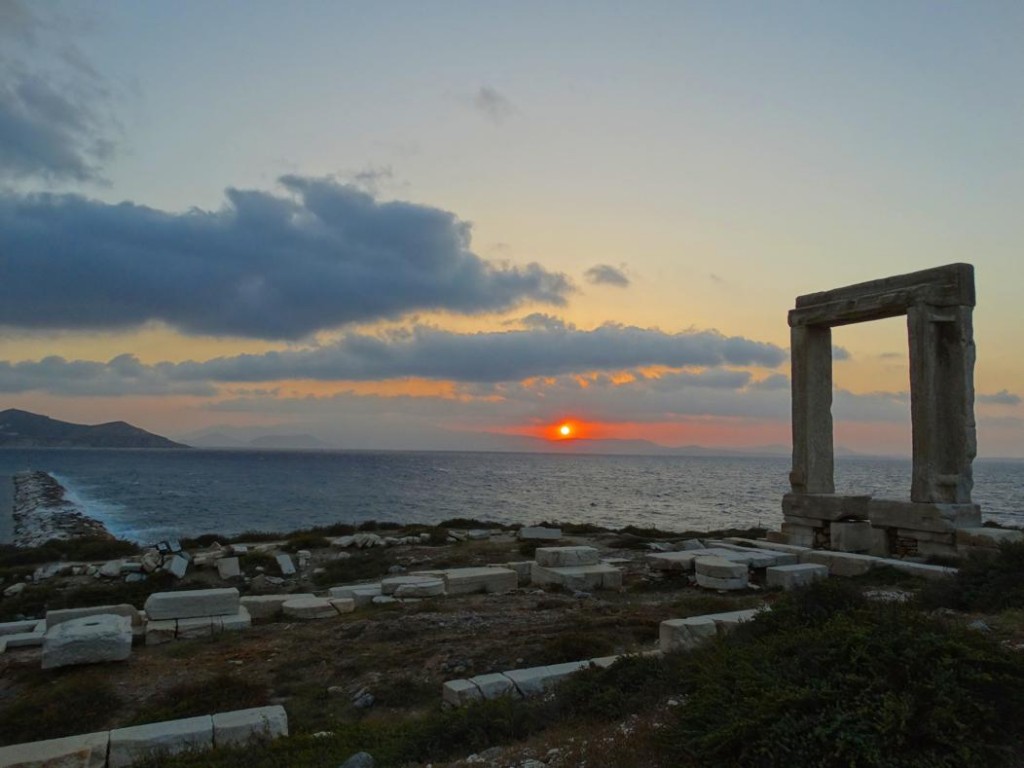 We would pick the windiest day of our visit to Naxos to climb the hill overlooking the city…but the “window to nowhere” was calling us. Even crashing waves and soaking wet paths couldn’t deter us from our mission. The Temple of Apollo stands like a beacon over the city port and we’d already been wondering if this ancient temple entrance just might be a portal to somewhere else entirely. Of course it’s fun to speculate, but unfortunately the huge marble pillars standing guard over the port were guarded by a barrier of their own. So no, we weren’t able to see if stepping through the gate would take us back in time. 🙁 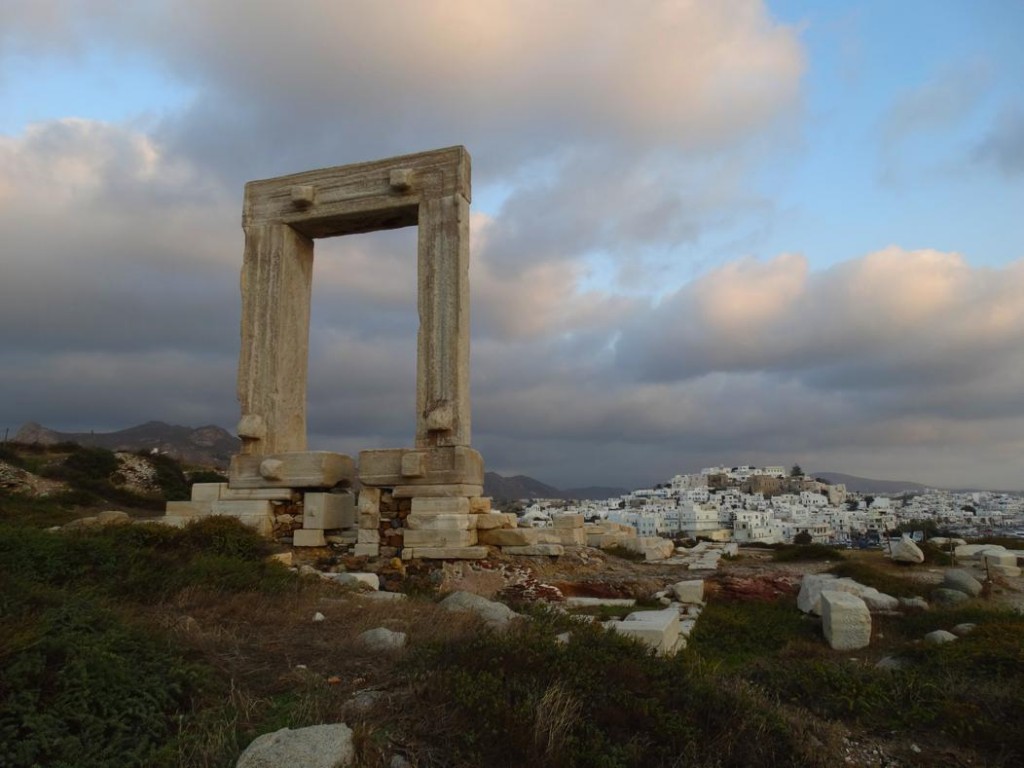 However, we did time our visit for the evening sunset and as we braved the winds, it was fun to imagine all this enormous window had witnessed since 530BC when the Temple of Apollo was first erected under the tyrant ruler Lygdamas. The Temple is also referred to as the Portara or Palatia. The Portara is all the remains of the Temple of Apollo and is made of 4 single blocks of marble. Each block weighs over 20 tons and is just over 19 feet long. It is speculated that winches were used to bring the blocks to the hill and put them in place where they still stand today. The doorway to the Temple of Apollo has certainly stood the test of time. Parts of the Temple were looted and used as a quarry for building of the Venetian Castro just above the port in Naxos Town. 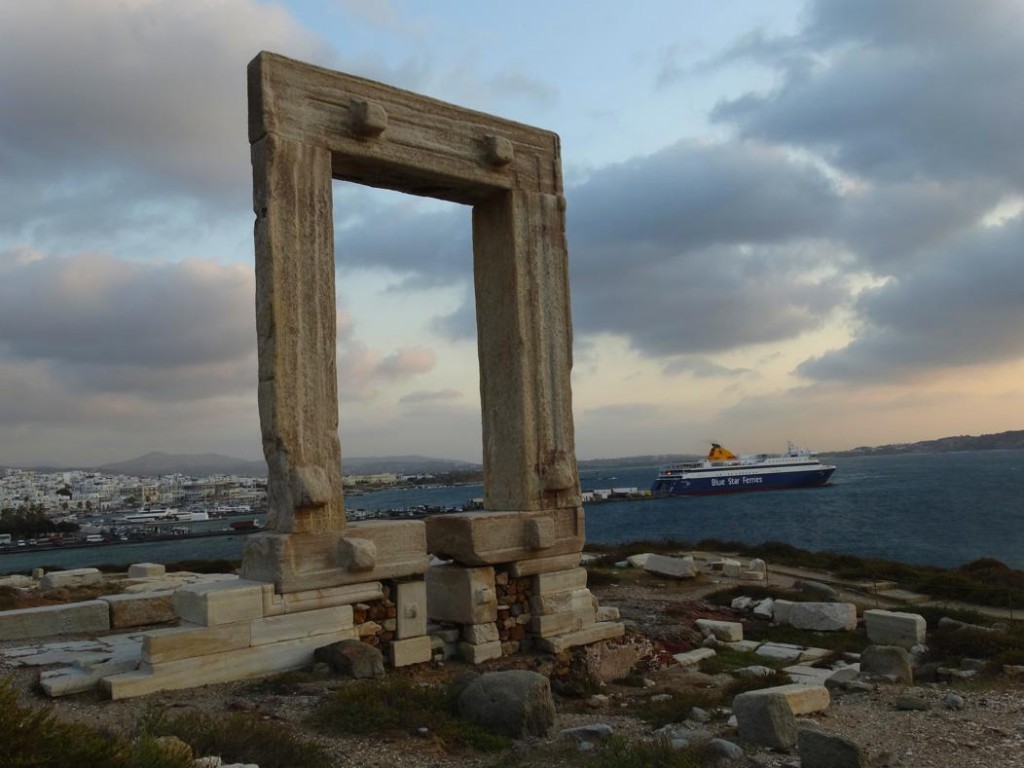 The Portara exactly faces the island of Delos, a holy sanctuary of Greek mythology as the birthplace of Apollo and Artemis.  On a clear evening it’s possible to see Delos, Mykonos, and Syros from this majestic monument. We caught the sunset and with it a feeling of over 2500 years of history coming before us. The faithful watching the sea for signs of their loved ones coming home or warriors protecting their beautiful island home. We were a part of an ancient history and were happy to have captured a small moment to share.