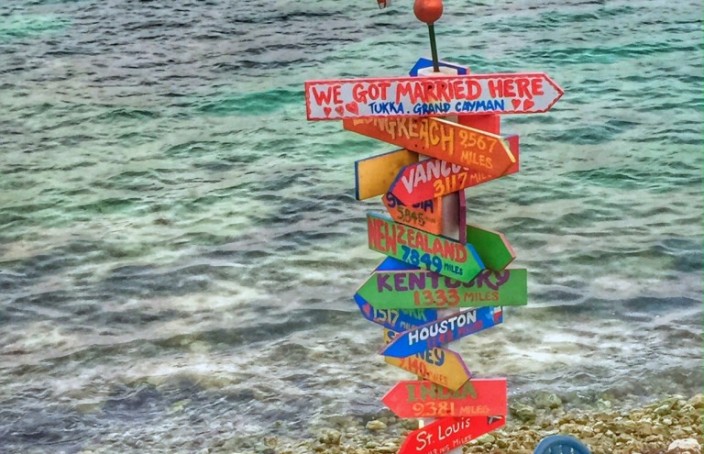 This place looks great.. I want to got there for a vacation...

Grand Cayman lies just 150 miles south of Cuba and 180 miles west of Jamaica in the central Caribbean. As the largest of the three Cayman Islands, Grand Cayman is just 76 square miles – 22 miles long by 8 miles wide. It’s hard to get lost on an island this small, but by the looks of all of the signs – everyone is looking for directions to paradise. Let’s follow the signs on Grand Cayman!

Swimmers beware! Mermaids in the water!

This island has lots of signs…do you think people get lost here a lot?? #caymanislands

Here in #caymanislands its all about the water!! 🐠🐢🐡

Finding our way back home…#caymanislands

The sister islands, Cayman Brac and Little Cayman, are located northeast. Together all three islands are situated on the edge of the Cayman Trench, the deepest part of the Caribbean Sea at a depth of more than four miles.

This British Crown Colony consists of the three islands: Grand Cayman, Cayman Brac, and Little Cayman. The islands, discovered by Columbus in 1503 and taken over by the British in 1670, are a self-governing member of the Federation of the West Indies.

Over 106 different nationalities are represented in Cayman. The majority of the population is Caymanian, Jamaican, British, American, Canadian, Filipino and South American. There are also a lot of Australians and Kiwis, South Africans and French. Maybe that’s why there are so many signs?

Whatever the reason – the signs on Grand Cayman all point the way to paradise!