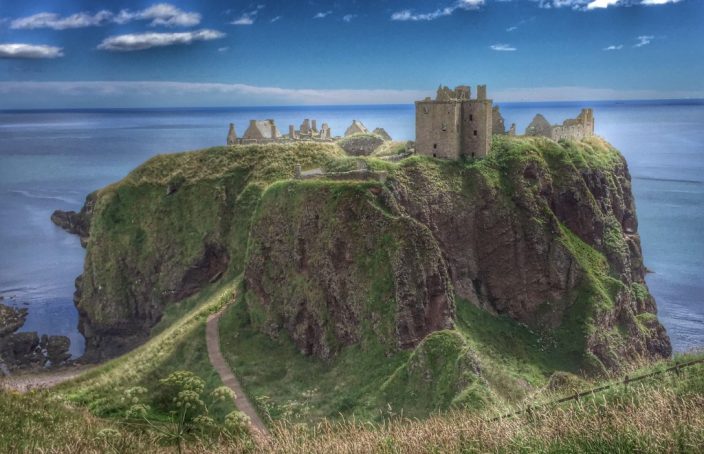 I love this post! I'm also fascinated by castles - am exploring Welsh ones at the moment while on a…

There is something about a castle. Imagining what life might be like living behind those walls. Whether it be in medieval times or recent history, we can’t help but wonder what life must have been like living in a castle. Scotland has so many castles to visit it’s possible to get “castled-out” – really, it’s a thing! Thankfully, we haven’t hit that point yet. Each of the Scotland Castles still holds our fascination and fuels our dreams. How on earth did they manage to stay warm in those enormous drafty, damp spaces?

For this part of the journey, we used the charming riverside town of Dundee as our home base. We chose this area partly because Cheryl is busy doing client work and needs reliable internet and partly because I am fascinated by the Coastal Castles of Scotland. This area would provide excellent day trips to visit them. 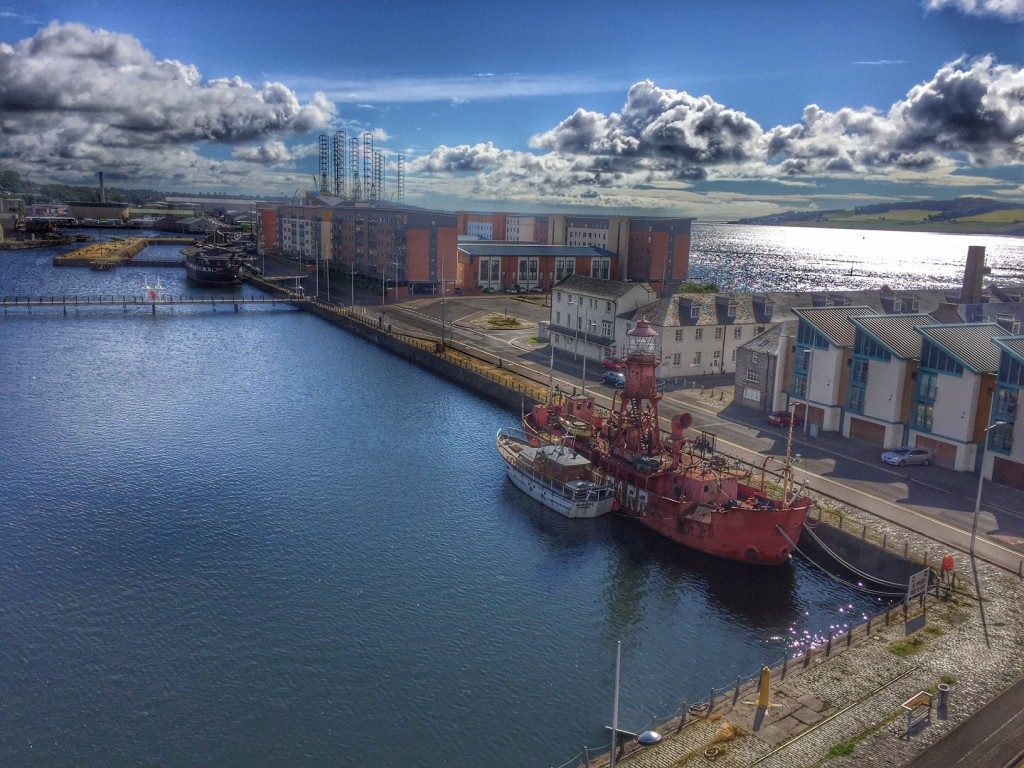 Tragedy on the Tay River

Our hotel, Apex Hotel and Spa, is located near the Tay River Bridge. This bridge, built in 1878 was the longest bridge of it’s type in the world at 2.75 miles. People from around the globe came to see the dedication. The architect, Thomas Bouch, received a knighthood upon the bridge’s completion. It was an engineering marvel until December 28, 1879 at 7:15pm when the bridge collapsed after its central spans gave way during high winter winds – taking with it a six carriage train carrying seventy-five passengers and crew. All seventy-five were lost in the icy waters of the River Tay. On a happier note, the new bridge seems very secure as we drove over it on our day trips out to the castles. 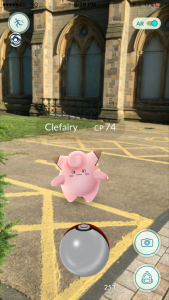 The Apex Hotel and Spa had another unadvertised feature of which we at first were unaware. Just outside the front door was a PokéStop of epic proportions. Lures were almost always there as were at least 20 people at a time playing on their phones. Pokémon were everywhere!

At first we couldn’t figure out why so many cars were parked beside what appeared to be an empty road – or why so many teenage boys were hanging out by the water with no girls around. As soon as I booted up Pokémon we knew the answer. And yes, I did go down and join them one afternoon while Cheryl was on a conference call. I leveled up twice! 🙂 I’m taking lessons from my Baby Boomers Guide to Pokémon.

Okay, back to the castles. Our first visit was to the Broughty Castle Museum in the seaside village of Broughty Ferry. Both a castle and a museum, this fortress sits on a rock dating back to 1496. The warden at the museum suggested it had been there far longer than 1496, but that was the first recorded mention. Anyway, it was very old. Each floor of the castle – gotten to by a very winding staircase – is a different type of museum depicting life during the castle times as well as a more modern gallery of paintings. The castle’s location directly on the Tay River provides gorgeous views and bracing winds – even in the middle of July. 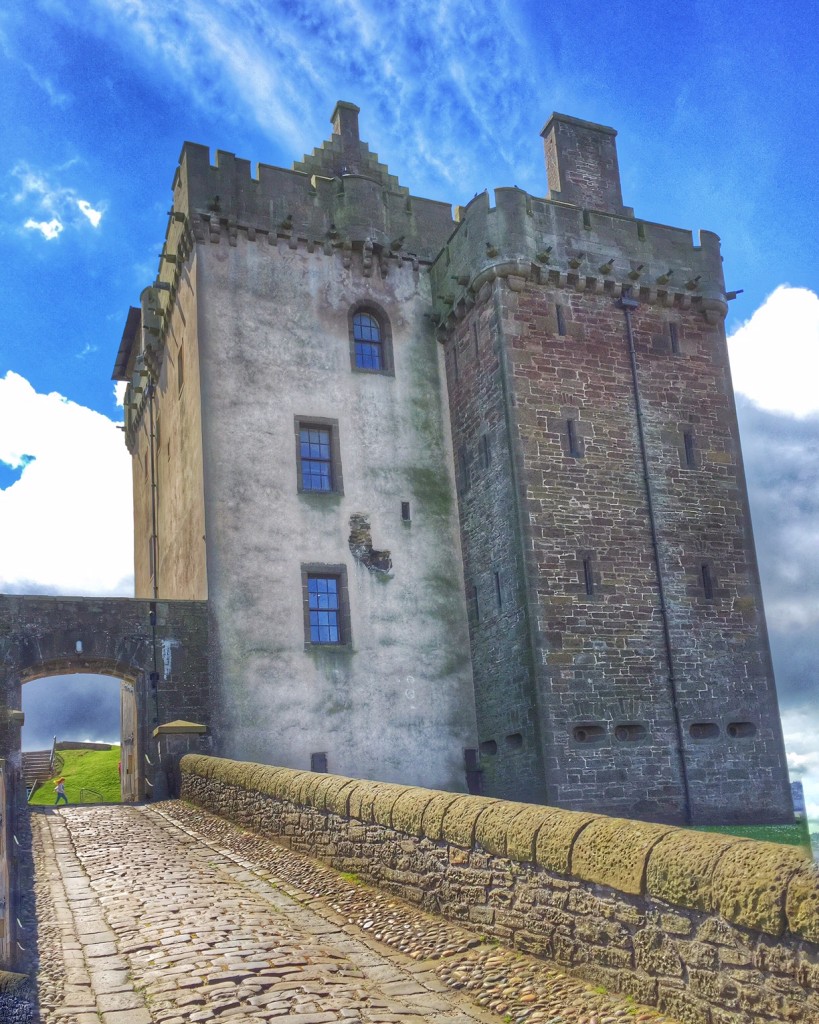 Our next castle, Glamis, wasn’t on the coast, but when you read that this castle is “Scotland’s Most Beautiful” how can you not visit it? And it is spectacular! Not just the castle (where I was gutted because inside we weren’t allowed to take pictures), but the gorgeous gardens along the river. It’s a place you can spend the entire day. 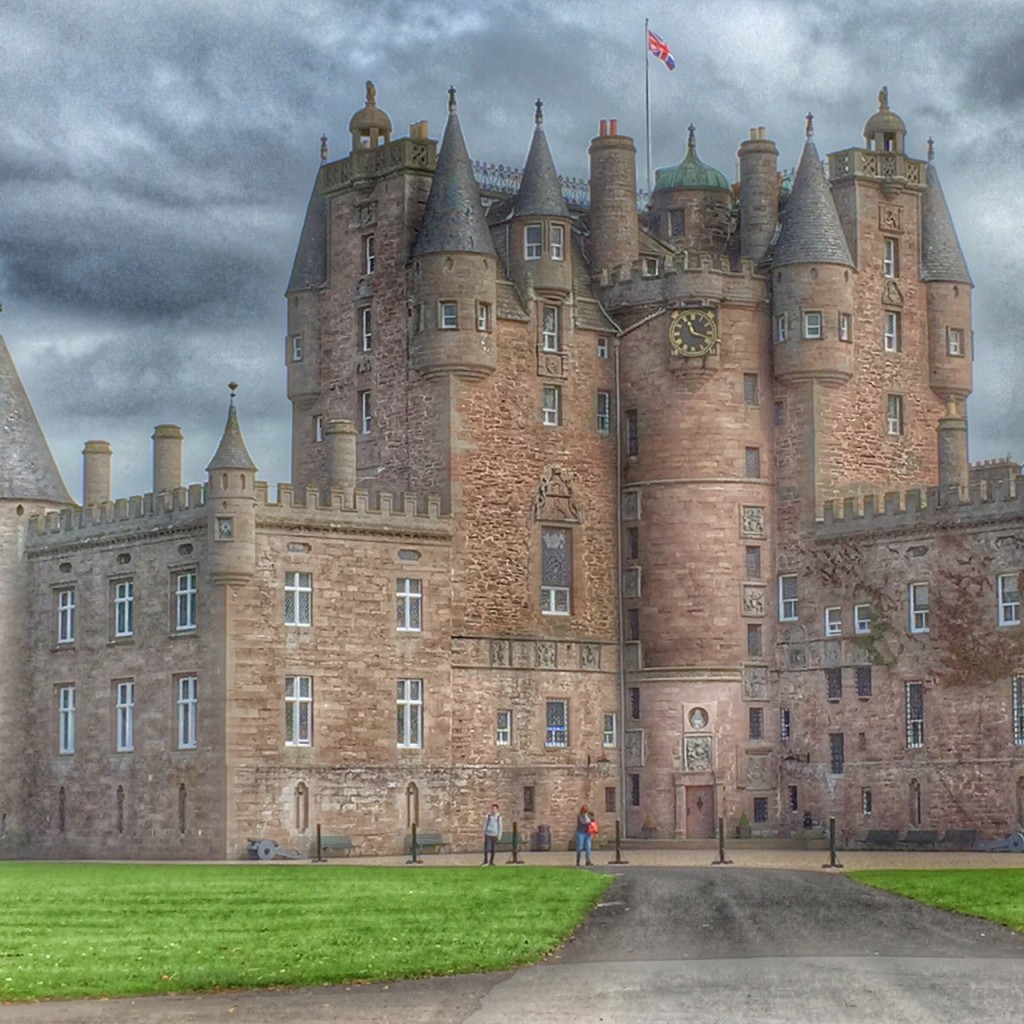 The Queen Mother, Elizabeth I’s mother and father were Lord and Lady of Glamis. From the history of Glamis Castle – “Lady Elizabeth celebrated her 14th birthday on August 4th 1914 and en route to the birthday treat – a vaudeville show in London- the streets suddenly filled with people. The crowds were cheering and waving flags. Then, at the end of the show, the theatre manager came onto the stage to announce that war had been declared on Germany that very evening. Soon after, Lady Elizabeth, her mother and her sister Rose, returned to Glamis where the castle was converted to a convalescent home for wounded soldiers.”

Later the castle became the childhood home of Elizabeth (the future Queen) and her younger sister Margaret, the first royal baby born in Scotland since 1600. There is even a pet cemetery hidden among the enormous fir trees for the loyal dogs and a guinea pig. We enjoyed lunch at the on-site restaurant as well. 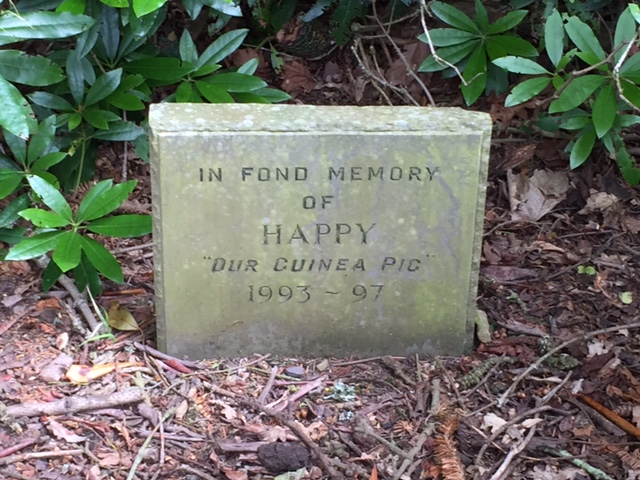 Our third castle, Dunnottar, is my of the favorite Scotland Castles, even though it hasn’t been in use since the 17th century.These castle ruins sit atop one of the most photogenic sights I’ve ever come across. Pictures just don’t do it justice. 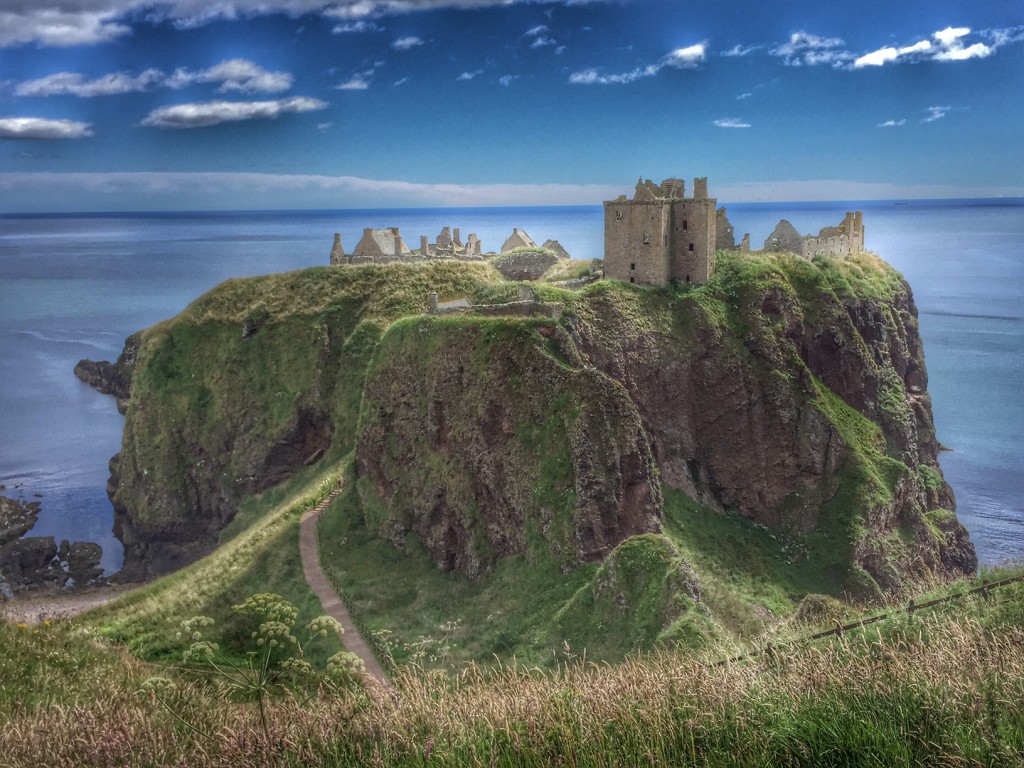 The ruins are spread over 3 and 1/2 acres on top of steep cliffs that drop into the North Sea. It’s truly a spectacular sight. Dunnottar Castle is best known as the place where the Honours of Scotland, the Scottish crown jewels, were hidden from Oliver Cromwell’s invading army in the 17th century. A narrow strip of land connects this mighty rock to the mainland and you can explore the castle as long as you’re willing to climb lots of steps. But it’s worth the climb! The buildings on top are in much better shape than they appear from a distance.

Watching the sky in Scotland is a fun pastime for us while we’re traveling through. It seems that within just a few minutes the skyscape can dramatically go from cloudy broody to clear and back to downright melancholy. It’s so interesting to watch. While we were visiting Dunnottar we had the full spectrum of emotions, making for great picture-taking. I was in heaven! 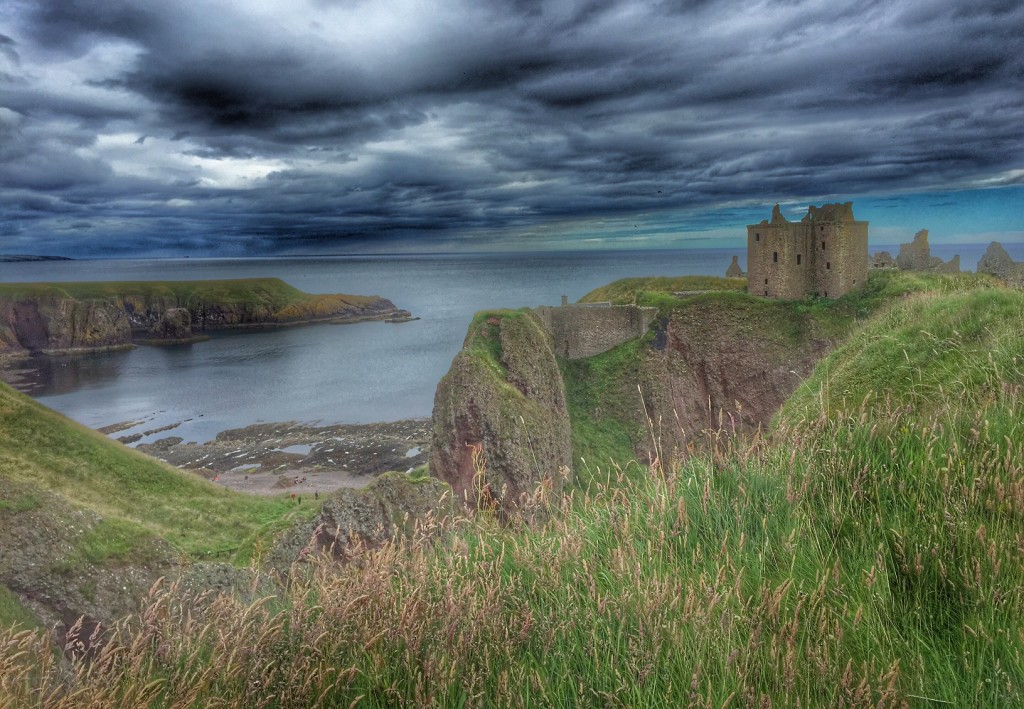 Our last day in Dundee we took a break from Scotland Castles long enough to visit the famous St. Andrews Links just down the road from where we were staying. I didn’t want to miss seeing this “Home of Golf” as perfecting my golf game has always been a dream that I’ve let slip due to time and travel.

Upon doing research about the Old Course, we found that getting a tee time is quite hard. You must submit a ballot 2 days before you want to play and you find out the next day if you’re one of the lucky few. If you don’t make the ballot, but are anxious to play St. Andrews Old Course, you can show up on the day and queue up to see if any group playing needs a fourth. This queue starts lining up at 3am! Fortunately for us, guided tours of the course are available and if you’ve visiting on a Sunday – no golf is played on the Old Course on Sundays – it’s free to walk (or spend the day) on the entire course.

Now we’re off on the “ancestry adventure” part of our trip! We’ll make our start in the Scottish Highlands town of Pitlochry. Here we hope to explore the areas where we found evidence of Cheryl’s ancestors dating back before 1750. We’ll be looking for old church records, cemetery headstones, and talking to anyone we can find who might get us closer to filling in that MacDonald family tree. Stay with us as we journey through this beautiful country and I promise we’re not done with the Scotland Castles yet!

If you missed the start of our Scotland Travel Journal from Edinburgh to Dundee, you can catch up here. Thanks for traveling along with us!