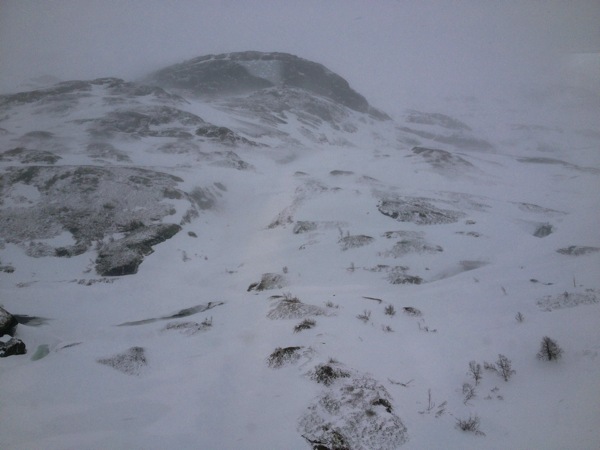 This is really a great article and a great read for me. It’s my first visit to your blog and…

We should have known it was going to be a spectacular ride on the Bergen Scenic Railway when our cab picked us up in the grey early morning dawn on June 2nd and the driver asked where we were headed. “Oslo,” we said sleepily. “Oh, it’s really snowing on the mountains today. Latest that’s happened in as long as I can remember,” he said.

Do they cancel trains on account of snow? How much snow are we talking about? We had lots of questions and no one to turn to for answers. We chose the Scenic Bergen Railway as our very first train from Bergen to Oslo, Norway to begin our 15 city journey by train. We’d even watched Disney’s Frozen – TWICE – to get a feel for the far North where we’d be visiting for the first time on our Great Summer Eurail Adventure!

Described by Eurail as “Norway’s most spectacular scenery. Travel from deep fjords to snow-covered mountaintops and from frozen lakes to grassy plains. Seasons appear to change along the way on a magnificent journey that you will never forget.” You’ll notice there is no mention of white-outs in the brochure.

LOOK! The snow is drifting higher than the train in some places!

These were just a few of the exclamations coming from our fellow passengers (and mostly us) as we trundled through the snow across the mountains toward Oslo. Even the movie couldn’t prepare us for the incredible whiteness. The glare was almost blinding. Sunglasses were coming out all around us and with each tunnel came a brief reprieve until we popped back out into the snowy gales.

It’s true that pictures tell a better story than words, so here is the White-Out on the Scenic Bergen Railway in all of it’s glory! 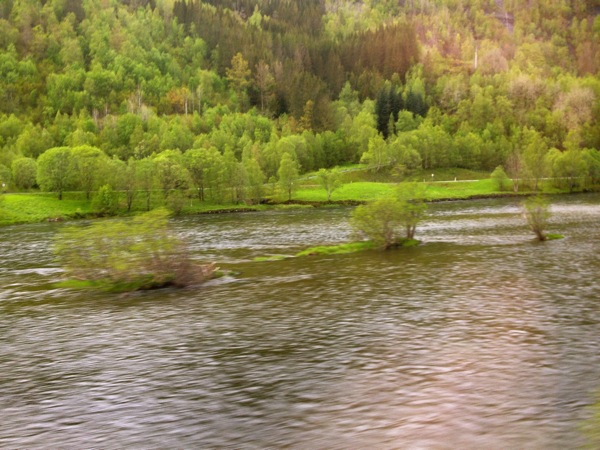 The trip started out calmly enough. A beautiful early June day leaving Bergen, Norway on our way to Oslo. The sun was shining and the rivers running alongside our train gave a whole new meaning to “scenic”. Our seats were cushy and comfortable and the panoramic windows were large. Life was very good! 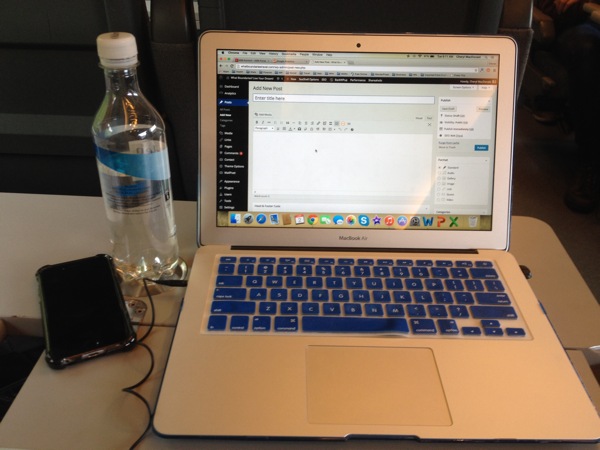 Cheryl even pulled out her laptop to get a little work done on the blog, but I could hardly keep my eyes off of the windows. After about an hour of trying to absorb the beauty going by, my eyes started to droop and I might have napped for a little while. Cheryl nudged me awake as the first evidence of snow could be seen. We’re from Florida, so snow is a pretty big deal for us. It soon became a VERY big deal! 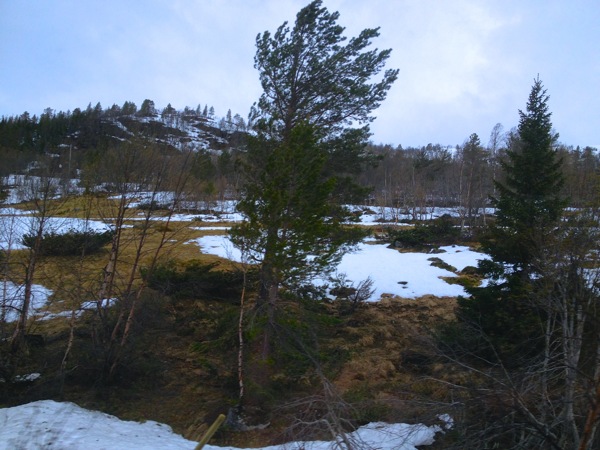 As the ticket manager was making his way through our train car, we overheard him saying that the weather ahead was getting bad. It was snowing hard up in the mountains and this was the latest he could remember getting snow – yes, we’d already heard this before – so as the miles rolled by, we watched and waited. 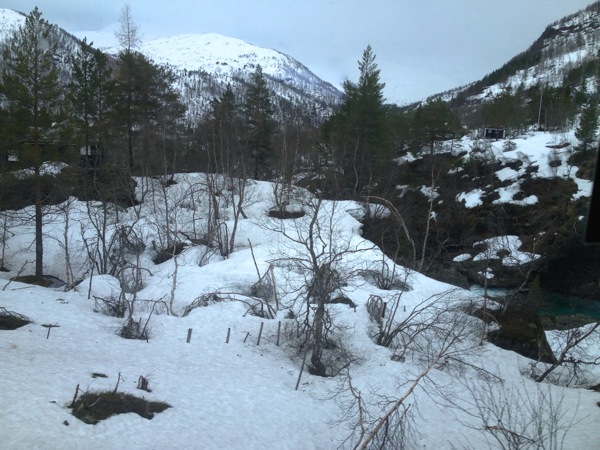 No active snowfall yet, but it was clear the Winter Snowmaker had been here earlier. Note you can clearly see fence posts and make out actual trees and bushes along the landscape. I was getting excited though. The “real” snow must not be far away! 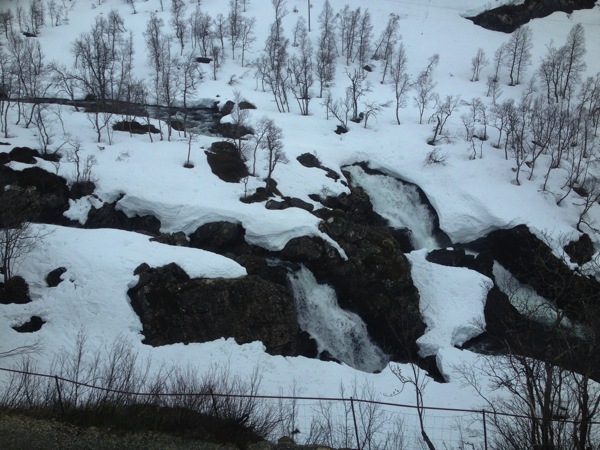 The frozen water was fascinating. Stopped in mid-motion, the scene was almost surreal. White on black with tints of blue where the water was deepest. We were still rolling along at a fast pace and no active snow – yet! 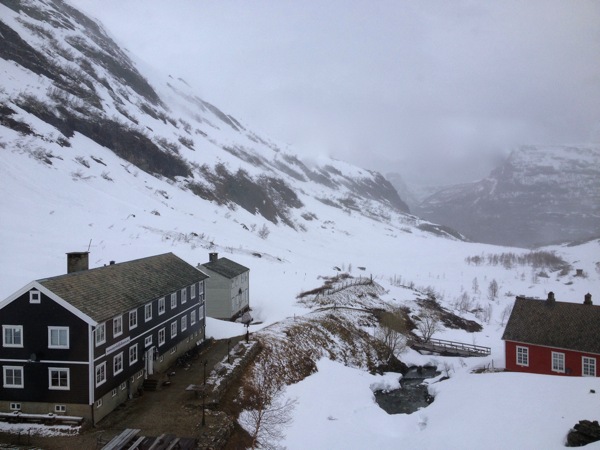 As we slowed into one of the first mountaintop stations, we could see the clouds forming around us. And wondered why on earth anyone would want to live in a place that got snow in June. 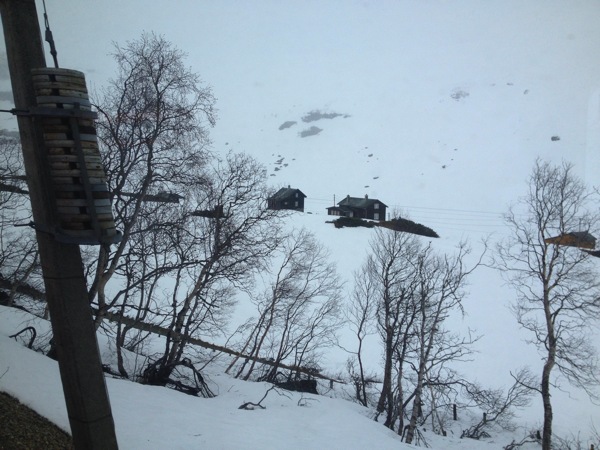 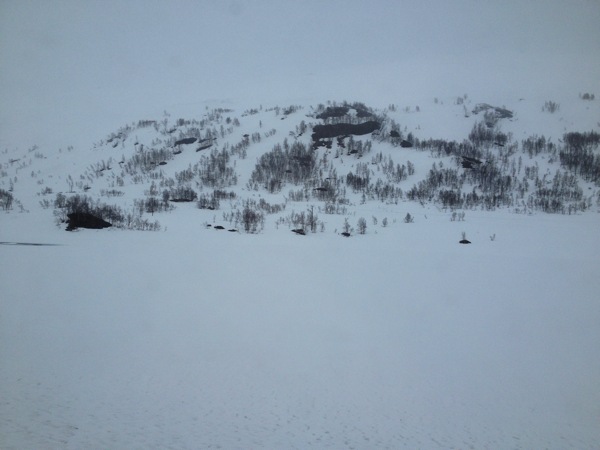 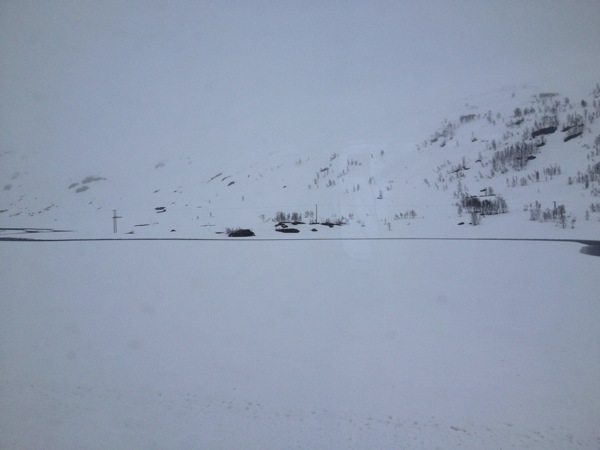 Disappear! That’s a river in the far distance. A pretty big one by the map we were following, but out here it was just a thin, dark line in the snow. 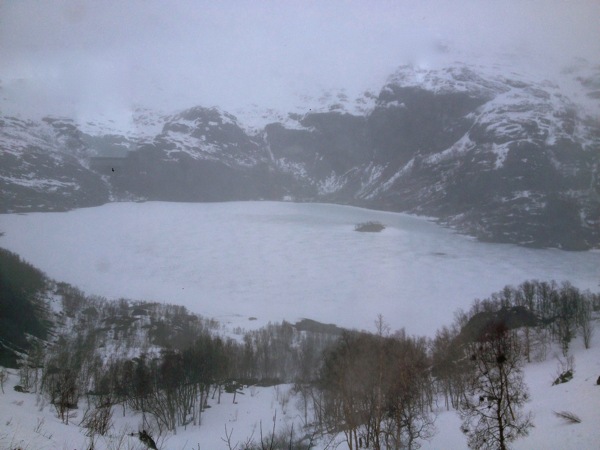 Now we started to get some real snow. The lake below must have been beautiful when the water wasn’t frozen solid. 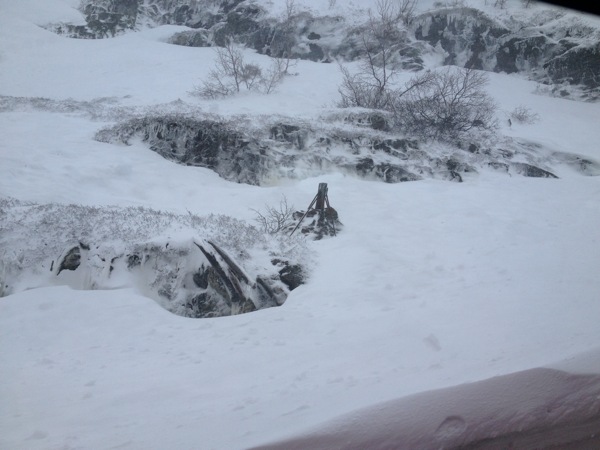 The snow kept coming down harder and the drifts along the tracks were becoming deeper. We would go through a tunnel and bucketfuls of freshly powdered snow would hit the train as we exited the other side. The train slowed down and we got our first looks at a complete white-out. 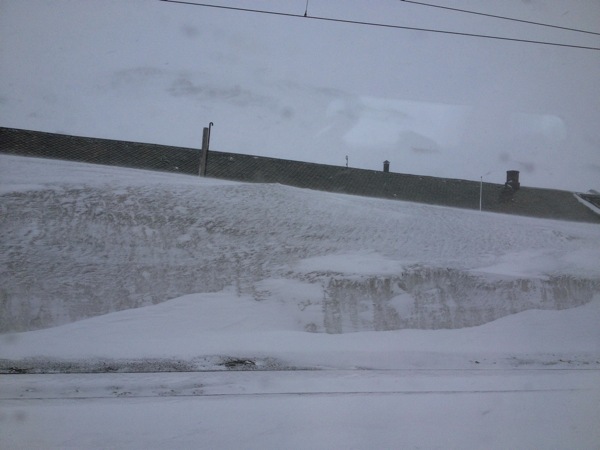 Those are the roofs of buildings! Big buildings! The drifts were higher than the train! We didn’t see any people, though it was tough to see anything at all during the storm. 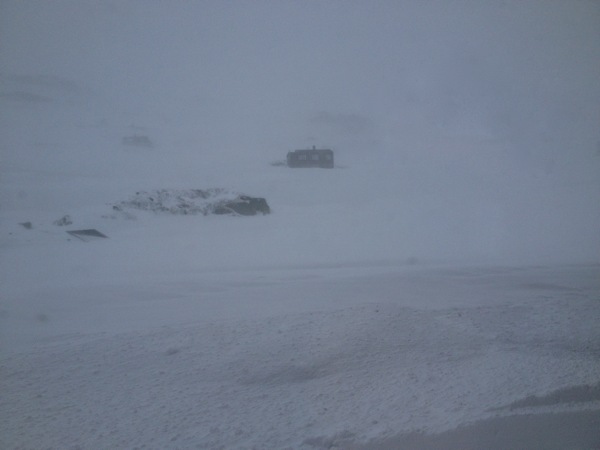 The world was both blindingly white and dark at the same time. Nearly every eye on the train was looking out the windows…in search of? This was a village – it’s hard to see the chimneys poking out from the depths of the snow. 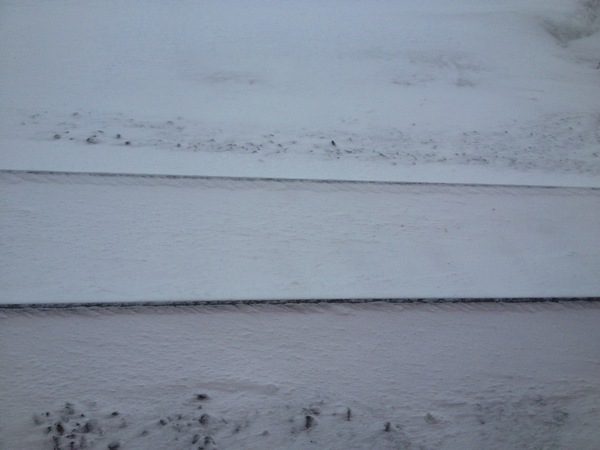 Deep drifts and clear tracks. All in a day’s work for the Scenic Bergen Railway!

Far too quickly, the sun reappeared and we were over the mountains. Onward toward Oslo. It was the first white-out on a train that we’ve ever experienced, though it will be one fondly remembered for a very long time!

This post may include links to our affiliate partners and we may receive a small commission should you purchase from them. This will be at no additional cost to you.