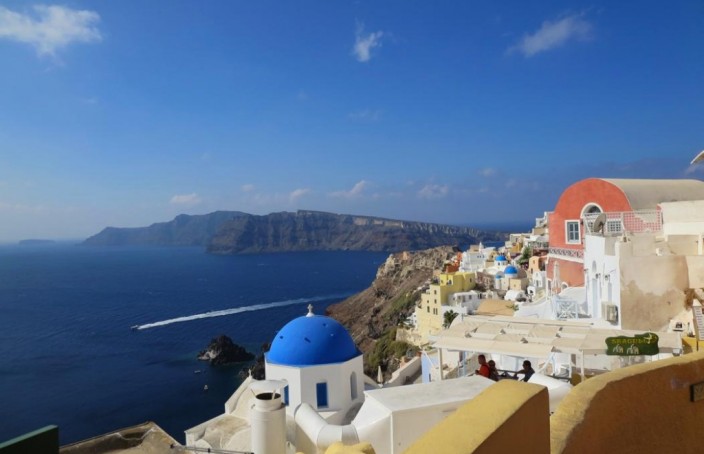 We began our Greek Island journey with Mykonos. We were awed by the multitude of colors and charm of the island – and of course, the cats! Then it was time to take the Blue Star Ferry down the Cyclades island chain to spend a bit of time on Santorini. Wow! If I thought it was difficult to pick just 7 photos of Mykonos to share with you, then Santorini practically blew me away.

So here we go again. Seven photos of Santorini, Greece to give you just the tiniest taste of what you’ll see when come visit yourself. It’s a paradise for a travel photographer and luxurious getaway for the avid vacationer. Santorini, Greece is indeed a very special place. Let’s see what this beautiful island has in store!

It’s the sky. It’s the water. It’s the flag of the country. It’s the iconic blue-domed churches that dot the landscape. Blue is everywhere in Santorini. The stark white and blue combination is thought to symbolize the joining of the sky, sea, clouds and waves – all a part of the fascinating history of the Greeks. 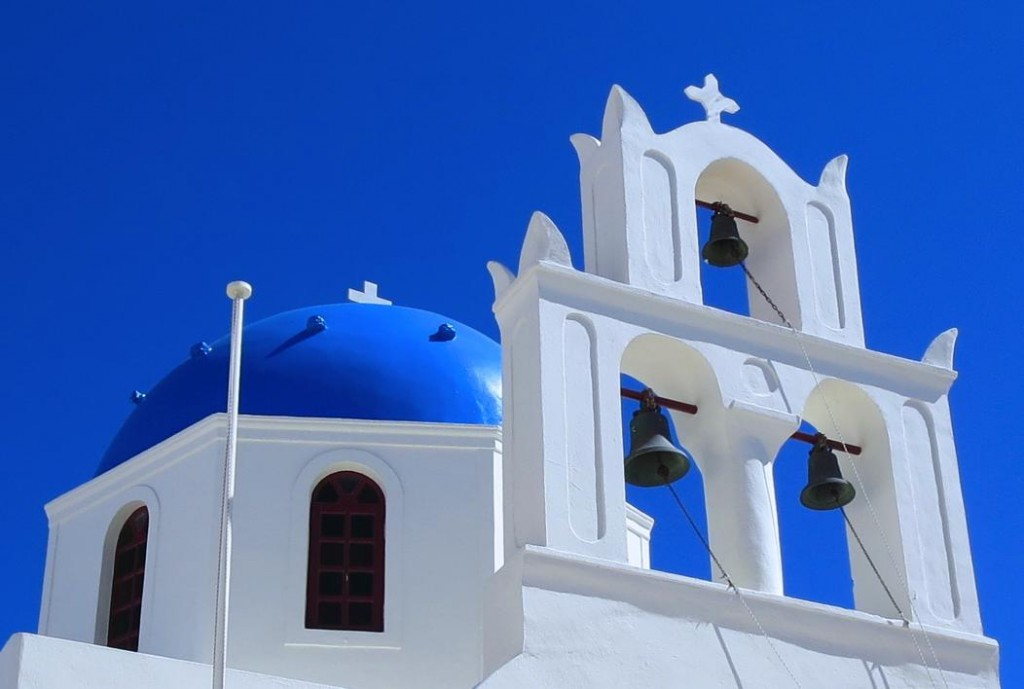 It’s impossible to not be impressed with the views from either the town of Fira or Oia on Santorini. You’re looking into an ancient partially submerged volcano that was first formed some 3600 years ago. While the Santorini volcano is dormant, it is still considered an active volcano. Houses cling precariously to the cliffs and it’s no wonder one of the most popular ways to scale the hills is by a sure-footed donkey. 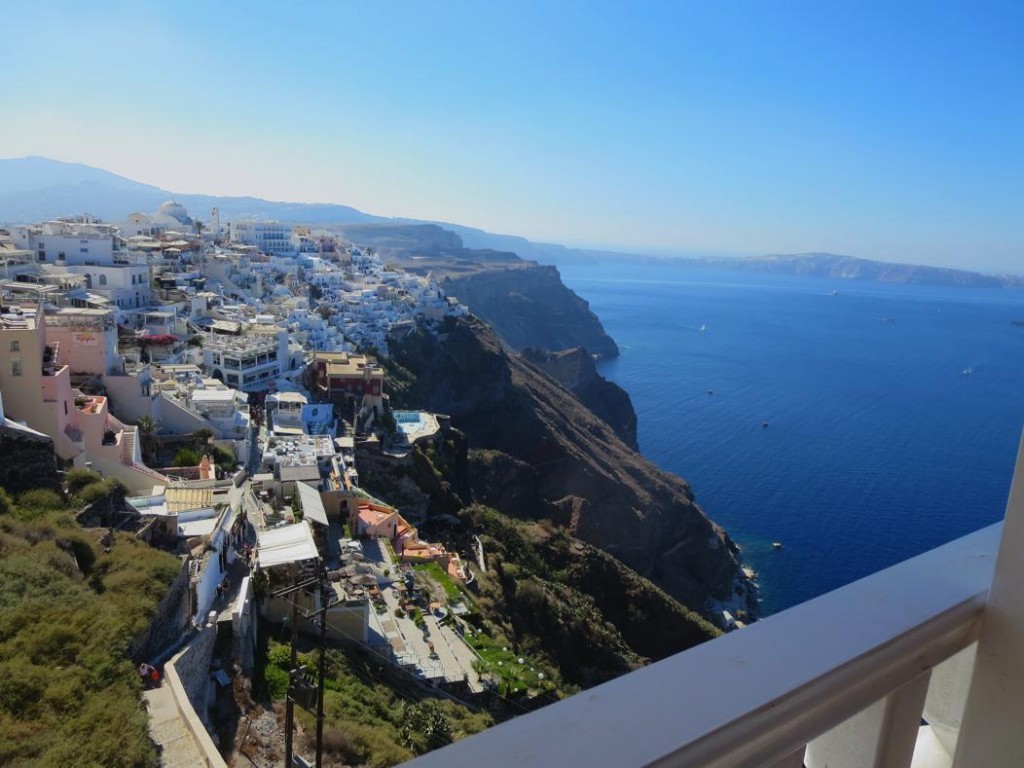 You can hear the chimes of the donkey bells as they start their daily climbs up and down the steep cliff roads. Hordes of tourist climb aboard these poor creatures as they stumble up the cobbled pathways. Although it’s a Santorini tradition, perhaps a better way to see the cliff views is by cable car. Capable of ferrying 1200 people per hour from the town of Fira (Santorini’s capital) over an altitude of 220 meters in just 3 minutes! The views are spectacular and no donkeys have to suffer in the heat. 🙂

This picture of the blue-domed church was one that I had yearned for (obsessed about) for years. Only on this trip did we find the exact GPS coordinates of this iconic Santorini church. But there are so many gorgeous vistas and postcard-like scenes to visit in Santorini that it’s impossible not to practically fill your memory card. Santorini is a photographer’s dream, even if you don’t find that special blue-domed church! 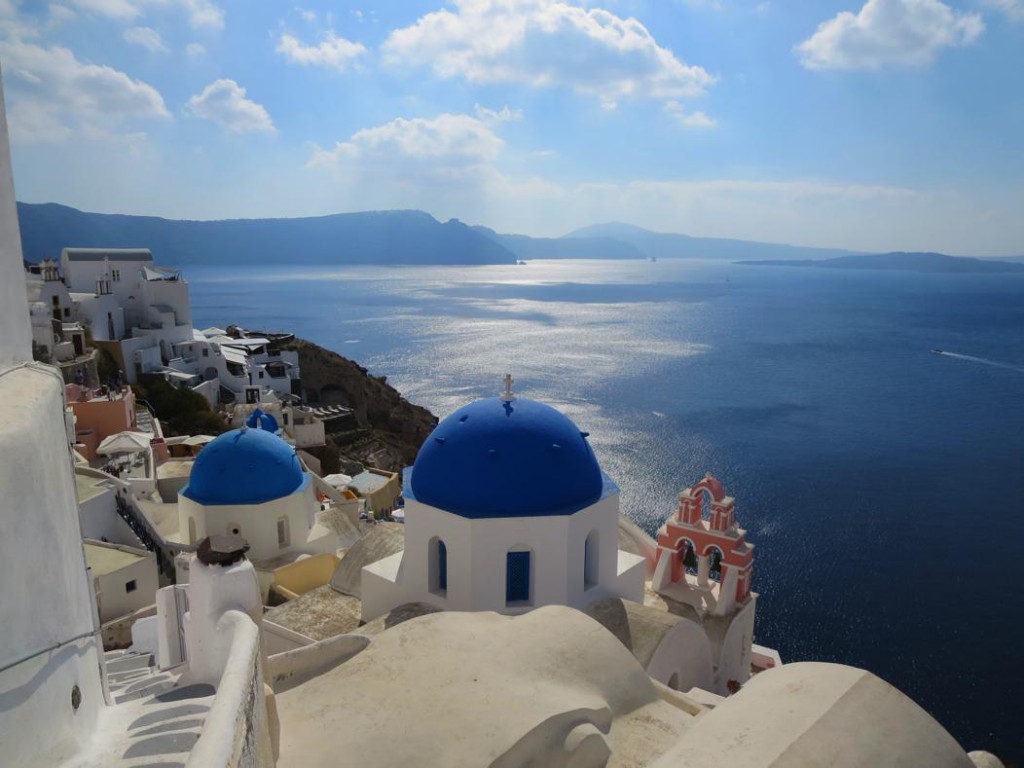 Smooth surfaces and clean curves are representative of many of the architectural styles of Santorini.  A bold splash of blue with an accent of brilliant bougainvillaea serve as ample decoration for homes and shops. These traditional “cave” houses show that the sea is the view here and is where all the emphasis should be. 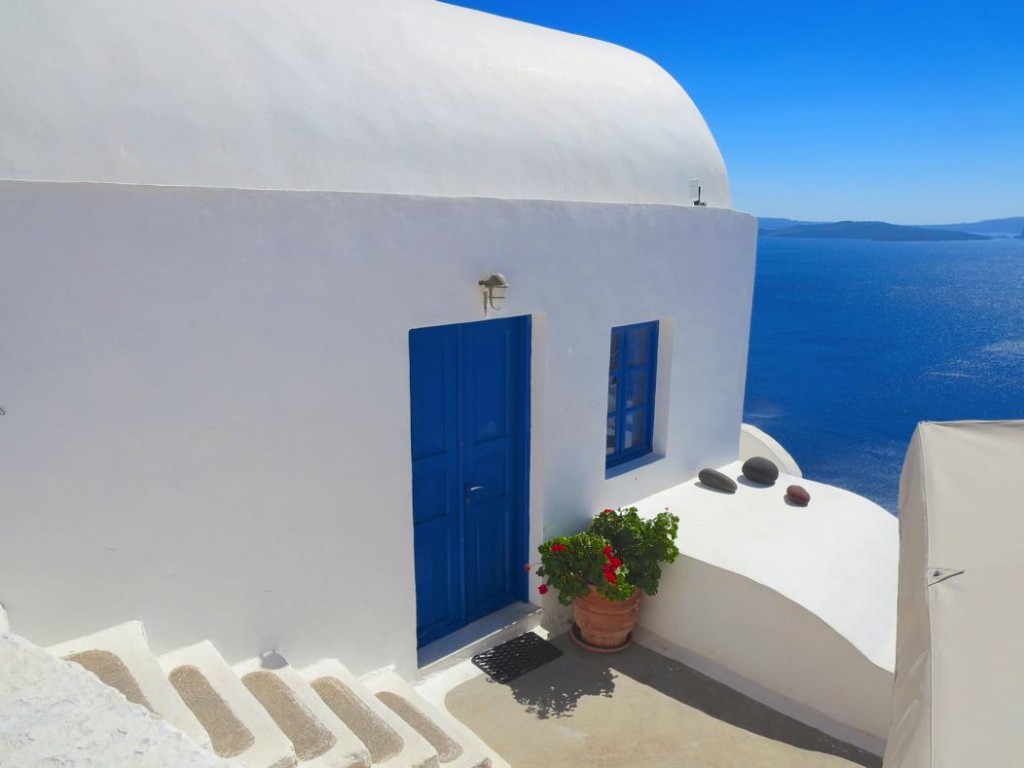 On days when the cruise ships are in port, the tiny streets of the main towns of Fira and Oia are jam-packed with people. On one day of our visit, we counted 26 buses full of eager travelers being let out at the foot of town! It is possible to hide, though. Always look up – many restaurants have upstairs seating where you can not only escape from the crowds, but you can get a spectacular view of the caldera as well! 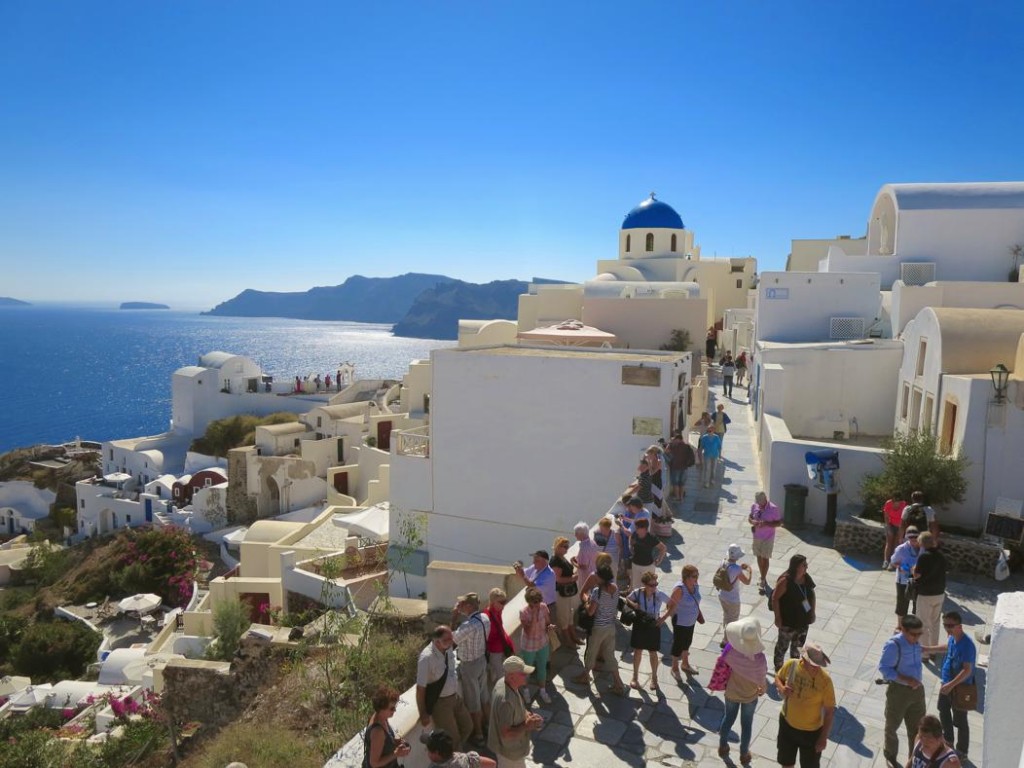 Religion plays a large part in the daily life of locals on Santorini and their churches bear witness to this long history. Built in the Cubist style, most Santorini churches have a single-aisle basilica with a dome. These colorful domes and bell towers are a classic symbol of the island of Santorini. 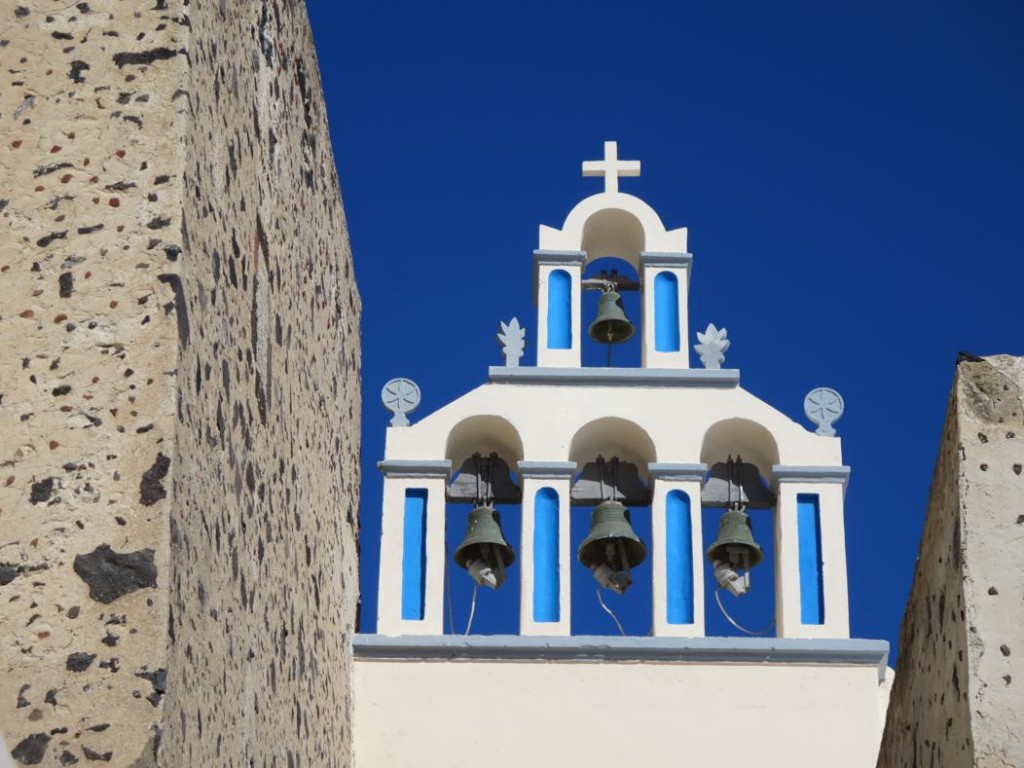 As with the 7 Photos of Mykonos, picking just 7 pictures to show Santorini is an impossible task. There is so much to experience on this island, from hip black sand beaches to local tavernas with some of the friendliest people we’ve ever met traveling. Santorini is a wealth of fun and well worth your time to visit. We hope you’ve enjoyed this tiny taste of Santorini!