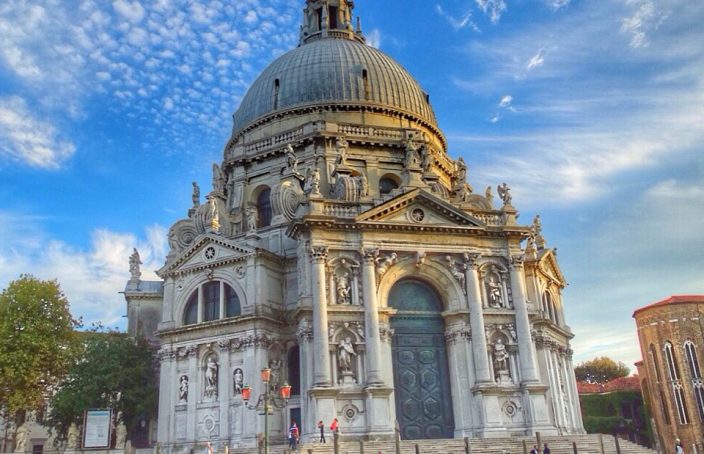 1630-31 was a horrifying time to live in Venice, Italy. Over 30% of the island population (46,000 souls) succumbed to the plague of the Black Death. The beloved patriarch of Venice, Nicolò Contarini, the doge himself, was not spared. Surrounding villages in the lagoon lost over 100,000 people so swiftly there was no way to properly bury the dead. Hope was lost and faith a mere memory. This is how the Plague Church came to Venice.

The devout of Venice turned to Our Lady of Good Heath, the Blessed Virgin Mary to beg for the safety of their loved ones. In return for her blessings and an end to the plague, they promised to build a votive or plague church, dedicated to her name as a reminder forever of their love and gratitude. The Basilica di Santa Maria della Salute, (Saint Mary of Good Health), simply called La Salute by Venetians was dedicated and begun in 1630. By the end 1631, the number of deaths in Venice from the Black Plague decreased significantly.

Even with the enormity of death surrounding them, the people of Venice wanted a proper tribute to the Virgin Mary. A competition was held, and of 11 submissions, the design of the 33 year old Venetian architect Baldassare Longhena was chosen. “I have created a church in the form of a rotunda, a work of new invention, not built in Venice, a work very worthy and desired by many. This church, having the mystery of its dedication, being dedicated to the Blessed Virgin, made me think, with what little talent God has bestowed upon me of building the church in the…shape of a crown.”

The Basilica di Santa Maria della Salute is one of several Plague (or Votive) churches found in Venice. Built between 1575 and 1691, these churches were built as either a prayer for deliverance or as a tribute of thanksgiving for keeping the city safe and her citizens healthy.