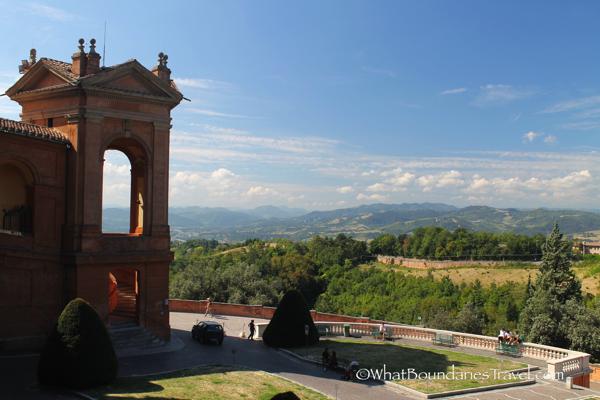 View from San Luca – Well Worth the Trip!

While visiting Bologna, we decided to walk off a little of the pasta we’ve been enjoying and take the Pilgrim’s Walk to the hilltop basilica church of San Luca. Set on the magnificent overlook of Monte della Guardia, San Luca keeps vigil on the city from a height of 300 meters.  Surrounded by rolling vineyards and covered porticoes, this church has been an icon to Italians for over 1000 years.

The pilgrimage is a steep walk through the ornate covered porticoes – 666 of them in all! – stretching a total of 3.5 kilometers, making it the world’s largest continuous portico. This walkway was begun in 1674 as a way to protect the Madonna di San Luca as she was carried on her yearly visit into Bologna to the Cathedral San Pietro. Starting at the Porta Saragozza near the tiny village of Meloncello, we joined the porticoes as they rose up and left the busy city of Bologna behind. The Meloncello Arch, designed in 1732 by the architect Carlo Francesco Dotti, is the convergence point of the three main porticoes of Bologna. 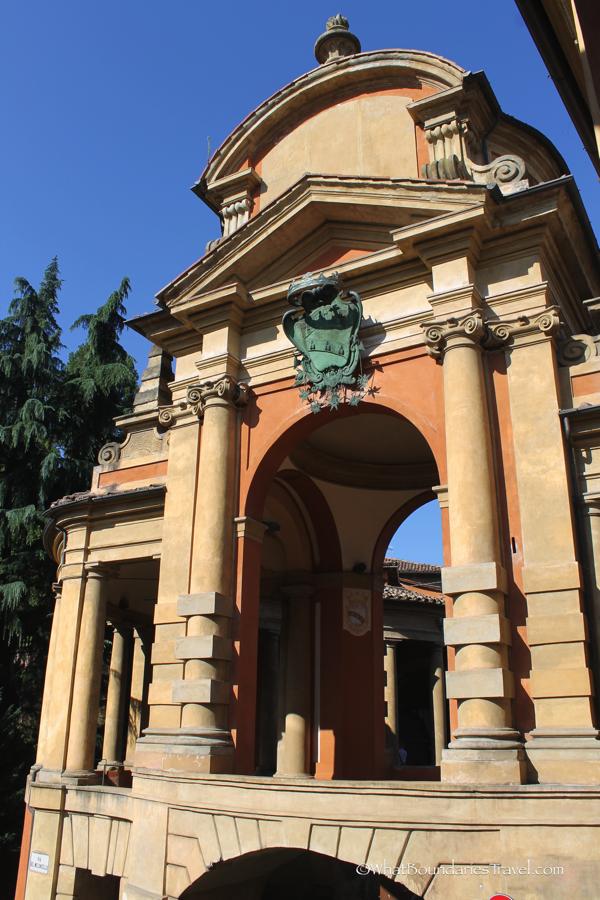 With the sun shining and the sky a brilliant blue, we ducked in and started our uphill trek! Many use this as a walking path or exercise run, but it was still quiet enough to feel as though we were the only ones making the morning journey. Along the walk are 15 beautifully painted chapels – each worth a stop – and a good opportunity to catch your breath! 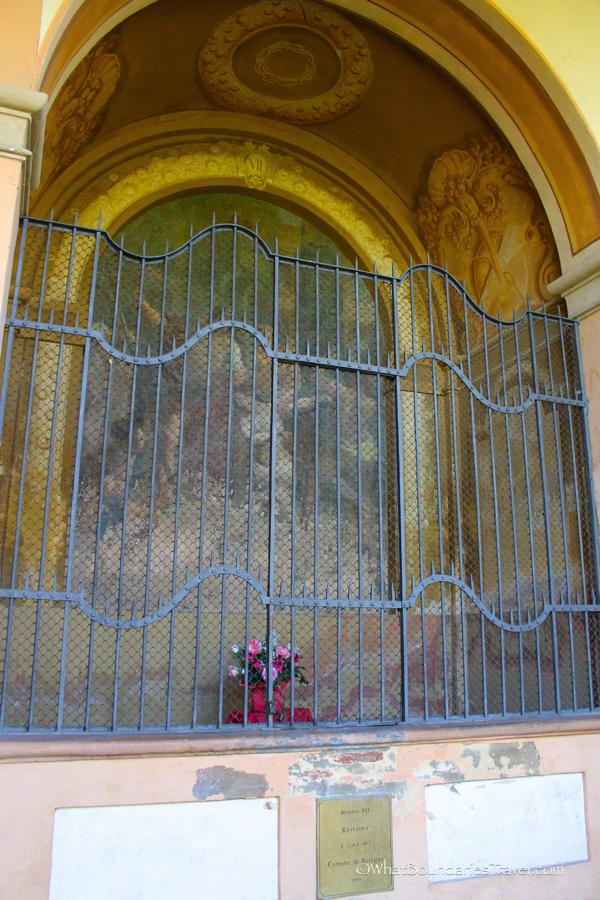 Chapel on Via San Luca

The reward for the pilgrimage is in reaching the church itself. San Luca basilica houses the important religious relic, the Madonna di San Luca, or portrait of Mary and Jesus supposedly painted by Saint Luke the Evangelist himself. The legend survives that this masterpiece was transported from the Middle East to this spot in Bologna in the 12th century. Inside the basilica, this portrait is on display behind an ornate display. 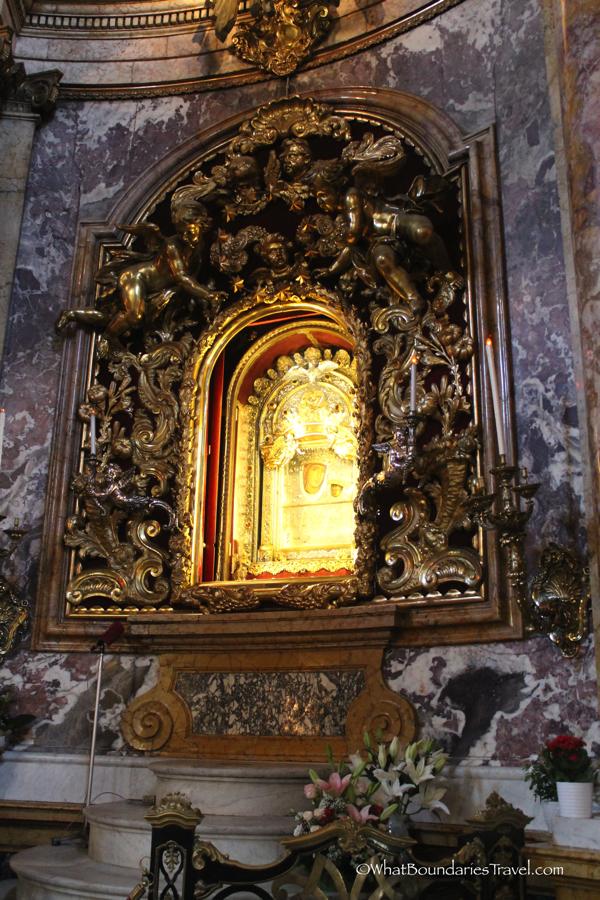 But don’t forget to enjoy the views along the way. Bologna behind and rolling hills of Tuscany as far as the eye can see. It’s one of the best pilgrimages we’ve ever done – okay it’s the first pilgrimage we’ve ever done, but it was very special! 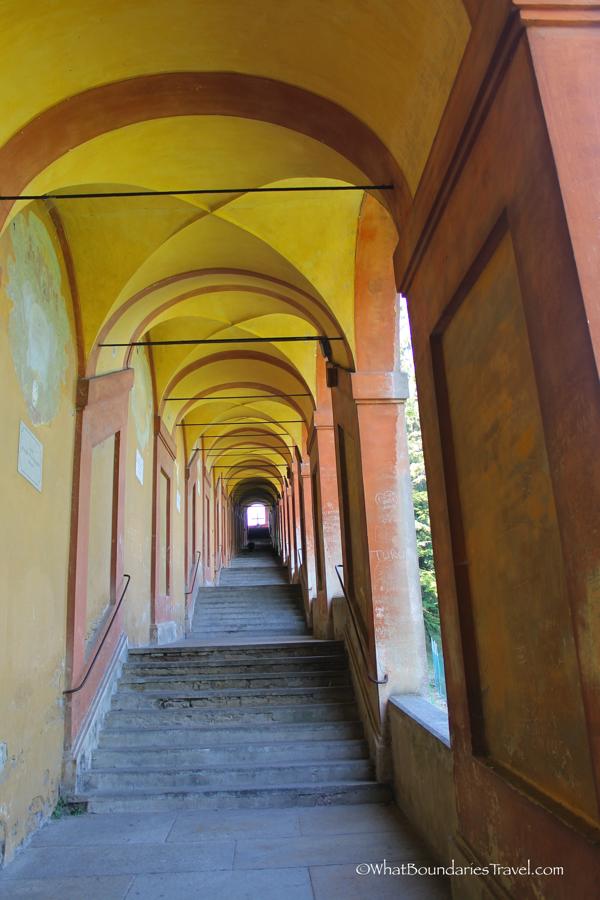 The sanctuary at San Luca is open daily from 9:00am and 6:30 or 7:00 on Sundays and holidays. During weekdays the sanctuary closes between 12:30 and 2:30, so start your trek accordingly. It took us about an hour and half to climb the porticoes, stopping for pictures and deep breaths along the way.