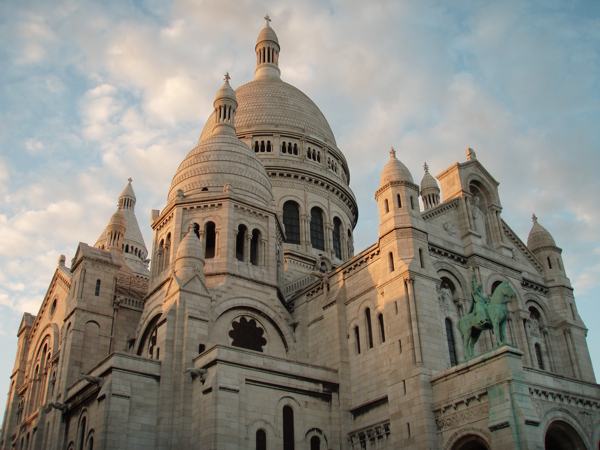 Excited to visit Paris first time next summer! Going there for a conference. Thanks for sharing awesome photos of Paris! 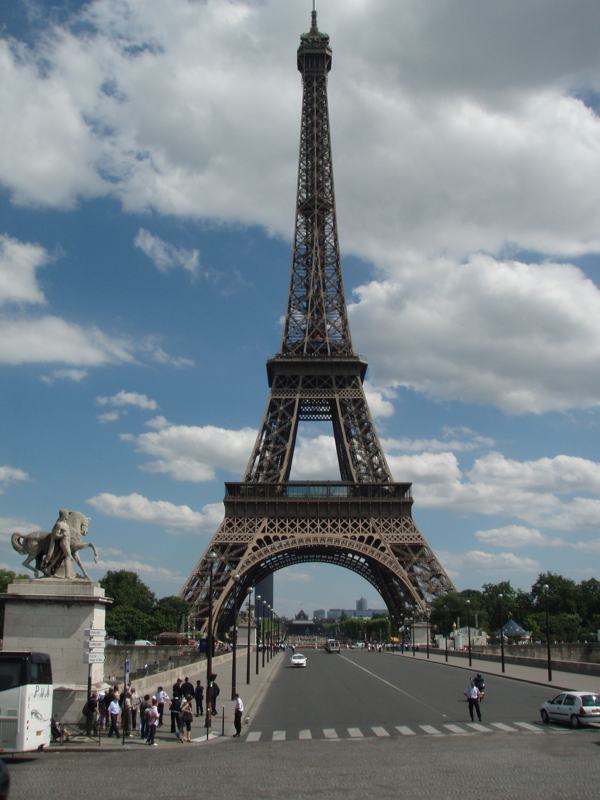 You can feel the excitement in the words from our travel journal! We had made it to Paris, the spectacular City of Lights. The first few days had a bumpy start – from getting pickpocketed (TWICE!) to learning our way around Metro systems and trying out awkward French phrases we’d practiced so hard. But once we settled in, this place felt like where we were supposed to be. Our days were spent hunting Hemingway’s ghost down crooked boulevards and resting tired legs with a glass of wine. And how many times did we just sit and look around saying, “We’re really in Paris, aren’t we?”

From our journal: Paris was all it promised and much more! The city of so many gorgeous spectacles you can’t possibly take them all in — we’ve been tourists non-stop for several days and decided to change gears to slow down and really visit some of the places we’ve only passed for a few minutes while the tour guide gave a quick explanation.

Paris has a current of creative energy running through it as deep as the River Seine. Artists, writers, sculptors of all periods have called this area home and it’s easy to see why. The monuments, the cathedrals, even the streets call to the artistic spirit and you can feel that spirit everywhere!

The gargoyles from the cathedrals are intriguing — taking LOTS of pictures of the creepy guys. 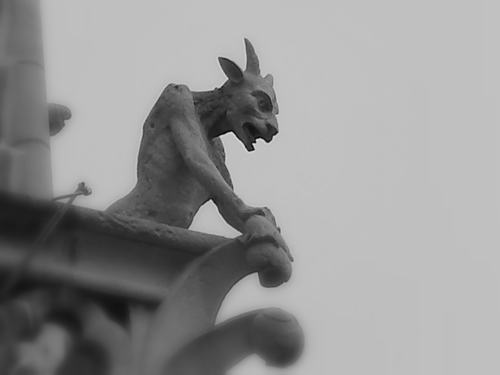 We left the comfort of the Marriott Rive Gauche (a beautiful hotel) and headed toward the more “artsy” area of Montmartre for our final two nights in Paris.

Our hotel/hostel room was MUCH smaller, but being in the center of the shadow of Sacre Coeur made up for it. Climbing the 402 VERY steep steps to the top of the dome gave an amazing view of Paris – the 402 steps down gave amazingly sore calf muscles the next day.  Our award awaits at the bottom of the steps…A toast to the awe-inspiring cathedral! 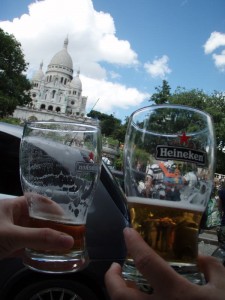 We even managed to stay up for the twilight lighting of the city – it was 10PM after all! 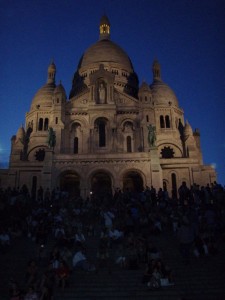 We saw the Eiffel Tower begin it’s hourly light show. It looked like diamonds shimmering up and down so fast it was hard to photograph. This city is so amazing! 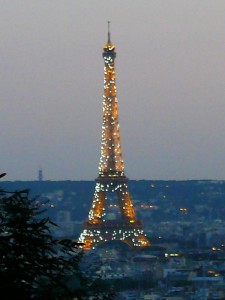 The Eiffel Tower Sparkles at Night

How we got there and around town:

We decided to take the train from Brussels to Paris on Rail Europe. They offer pretty decent deals on either rail passes or one way trips.

We stayed at the Hotel Altea Utrillo, in the heart of Montmartre, 5 minutes walk from Sacre Coeur.  It was a little more pricy than our typical hostels, but we wanted to splurge – we were in Paris after all!  Cost was about $70 USD per room (not per person like most hostels).  You can see some great reviews and pictures at Hostelworld.com.

Almost every destination we jumped on the Open Top Buses to get a tour of the area and map out where we wanted to spend more time.  We used City Sightseeing most of the time.  Check to see if they offer the 2-day pass, well worth the additional Euro and it gave us transportation for 2 days to get around the town!

Some of the above tips include actual services we used and that we have developed affiliate relationships with.  We had great experiences, or we would not promote them!  Safe Travels!