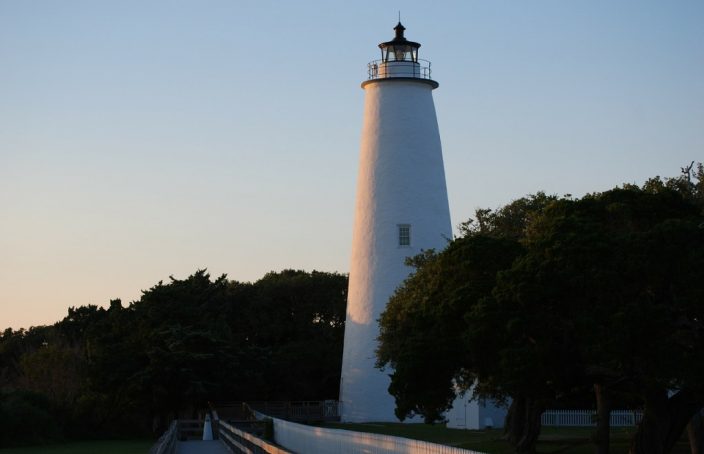 In honor of August 7, National Lighthouse Day, we’d love to showcase the Lighthouses of the Outer Banks. It was on this day in 1789, that Congress approved an Act for the establishment and support of lighthouse, beacons, buoys and public piers. Outer Banks Lighthouses are as much a part of the landscape and draw of this area as are the beaches themselves. Planning a visit to either the Cape Hatteras National Seashore or one of the individual 5 main Outer Banks Lighthouses is a treat for the entire family.

“As America continues its technological progress into the 21st century, it becomes easy to forget the wholesomeness and serenity of preindustrial establishments such as lighthouses. The history they provide gives us the opportunity to step back in time and learn more about our country. The contributions they made to our society, from protecting our coasts to guiding our sailors, should continue to be appreciated and remembered.”

The Outer Banks, a chain of barrier islands located just off the coast of North Carolina, is home to 5 spectacular lighthouses: Currituck Beach, Bodie Island, Cape Hatteras, Roanoke Marshes, and Ocracoke Island. Outer Banks Lighthouses are among some of the tallest sentinels in America and hold a special place in our hearts and our history.

Spanning from Corolla to Ocracoke Island, there are a total of five very different lighthouses on the Outer Banks. From the distinctive red brick of Currituck Beach Lighthouse to the north, all the way down to the second oldest lighthouse in the US (and oldest in North Carolina) at Ocracoke Island Lighthouse, you’ll find an interesting seafaring history still alive and well in the Outer Banks. 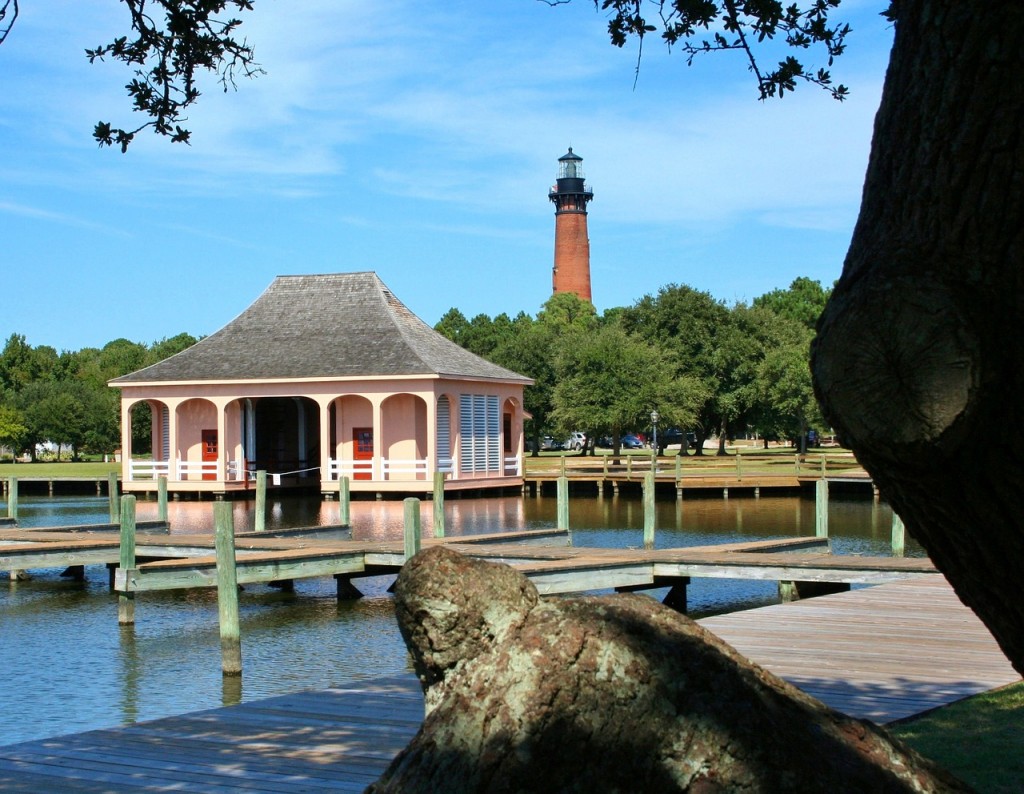 As the northernmost lighthouse in the Outer Banks and the state of North Carolina, this beacon served as protection to ships traveling close to shore to avoid the swift and tumultuous Gulf Stream. As so many ships were shipwrecked against the rugged Outer Banks shoreline, the Currituck Beach Lighthouse was begun in 1872 and has been in operation since December 1, 1875.

At 162′ feet tall, the lighthouse’s first-order Fresnel light (the largest size available for American lighthouses) and on a clear night can be seen for 18 nautical miles as the light rotates in 20 second increments with flashes for 3 seconds each turn. The lighthouse was electrified in 1933, and the keeper’s positions were discontinued in 1937.

This lighthouse stands out for its distinctive red exterior. This design was intentional, to set the Currituck Lighthouse apart from its Outer Banks neighbors with their black and white exteriors. After completion, the lighthouse was left unpainted, allowing visitors to marvel at the sheer number of bricks involved in its construction.

The Currituck Lighthouse is easily accessible from NC Highway 12 to Corolla near the magnificent historic Whalehead residence and Historic Corolla Park. And if you’re game the lighthouse itself is open to visitors who can climb the 220 steps to the top for spectacular views of the Whalehead, the Currituck Sound, and the Atlantic Ocean. 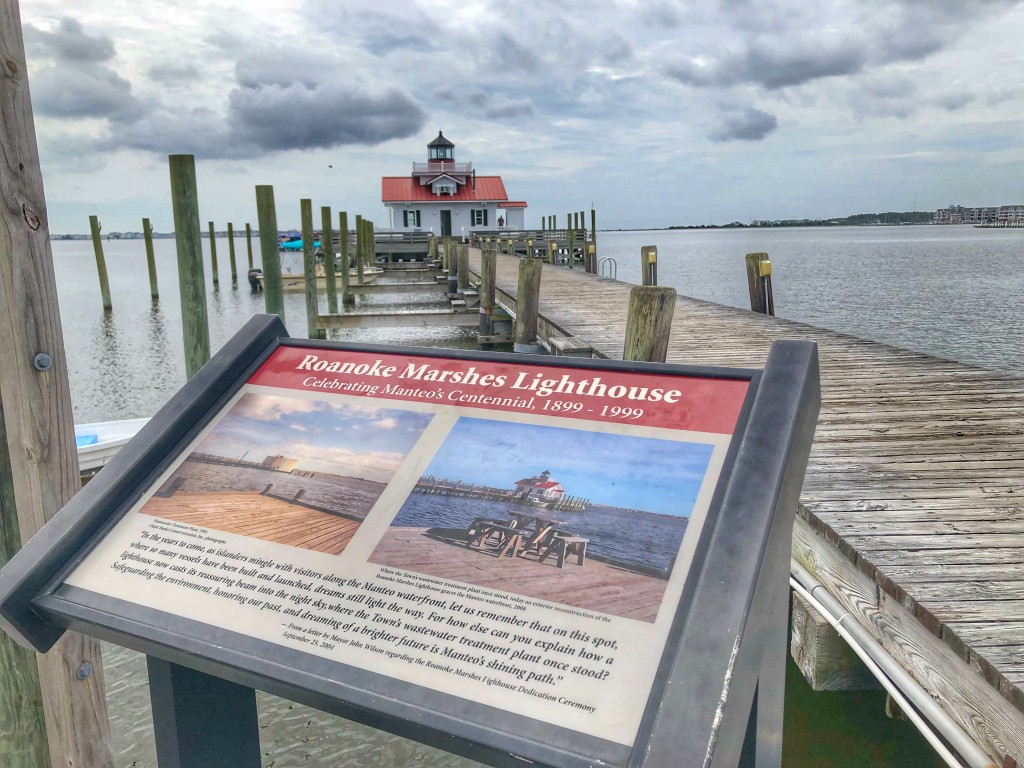 While this particular Outer Banks Lighthouse is just a replica, it’s a chance to see the unique design and history of the cottage-style screwpile lighthouse which stood at the southern entrance to Croatan Sound. As the only river lighthouse left in Dare County, it served as an aid to navigation along North Carolina’s heavily trafficked rivers and sounds from the early 1800’s.

The first Roanoke Marshes Lighthouse went into service in 1831 but was abandoned by its light keeper after just 8 years because of extensive and neglected repairs. The second Roanoke Marshes Lighthouse was first lit in 1858, and despite being taken out of service by the Confederate soldiers briefly during the Civil War, remained in operation for almost 15 years. Unfortunately, by 1872, a combination of sinking marshes, erosion, and shipworms had devastated the foundation structure beyond repair.

This lighthouse replica was actually the third to carry the name “Roanoke Marshes Light” as the first two, also constructed in the 1800s, were lost soon after they were constructed and put into service. Still operational today, the lens of the new Roanoke Marshes Lighthouse is a fourth-order Fresnel lens with a fixed white light and is an active aid to navigation, guiding boats into Shallowbag Bay. The fourth-order Fresnel lens in the lantern room, dating back to the 1800s, was loaned to the town of Manteo by the US Coast Guard. 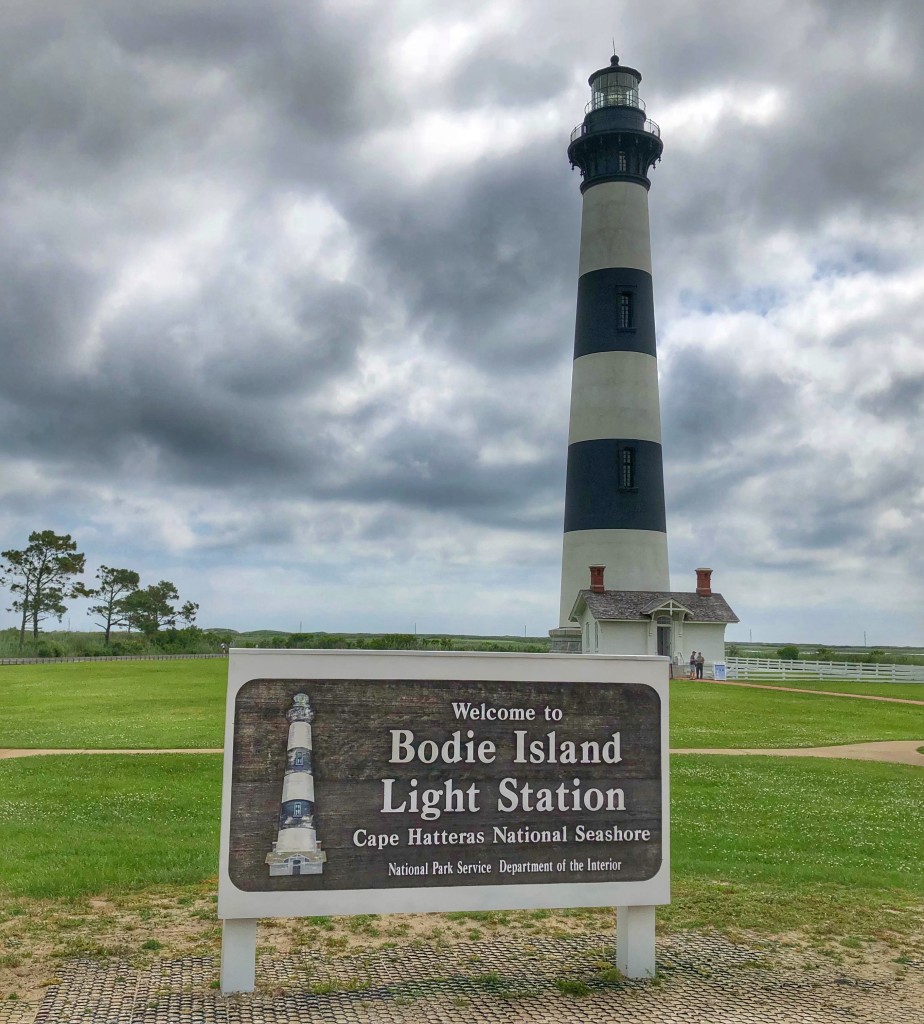 The Bodie Island Lighthouse (pronounced “Body”), is a gem of the National Park Service and a favorite of Outer Banks Lighthouse lovers. This distinctive black and white horizontal striped structure stands at 156′ ft. and is a much-loved landmark for OBX visitors heading towards Hatteras Island.

Bodie Island Lighthouse has served this dangerous coastal region well, but it almost didn’t happen. In 1837, Lieutenant Napoleon L. Coste settled on this particular part of the coastline, noting that “more vessels are lost there than on any other part of our coast.” By 1847, construction began on a 54′ ft. lighthouse, but the brick foundation was unsupported and in the end, this first lighthouse was abandoned. A second 80′ ft. lighthouse was commissioned in 1858, but this new lighthouse was destroyed by Confederate soldiers during the Civil War just 2 years later.

Finally, construction on the current Bodie Island Lighthouse began  in 1871. This lighthouse was moved further inland to a 15 acre site, and a lighthouse keepers’ home was constructed at the same time. By 1872, the lighthouse was finally in operation with a first-order Fresnel Lens that can be seen 19 miles offshore, making full rotations every 27.5 seconds. In 1932, the Bodie Island Lighthouse became automated, and by 1953 it was transferred into the care of the National Park Service.

Located just south of Nags Head and Whalebone Junction, at the intersection of Highway 158, Highway 64, and NC Highway 12, the Bodie Island Lighthouse is open for climbers from the third Friday in April to Columbus Day in October. Ticket sales begin at 9 a.m. daily, with tours running every 20 minutes until the last climb at 4:30 p.m. The 214 steps are worth every puff and pant as the views are amazing! 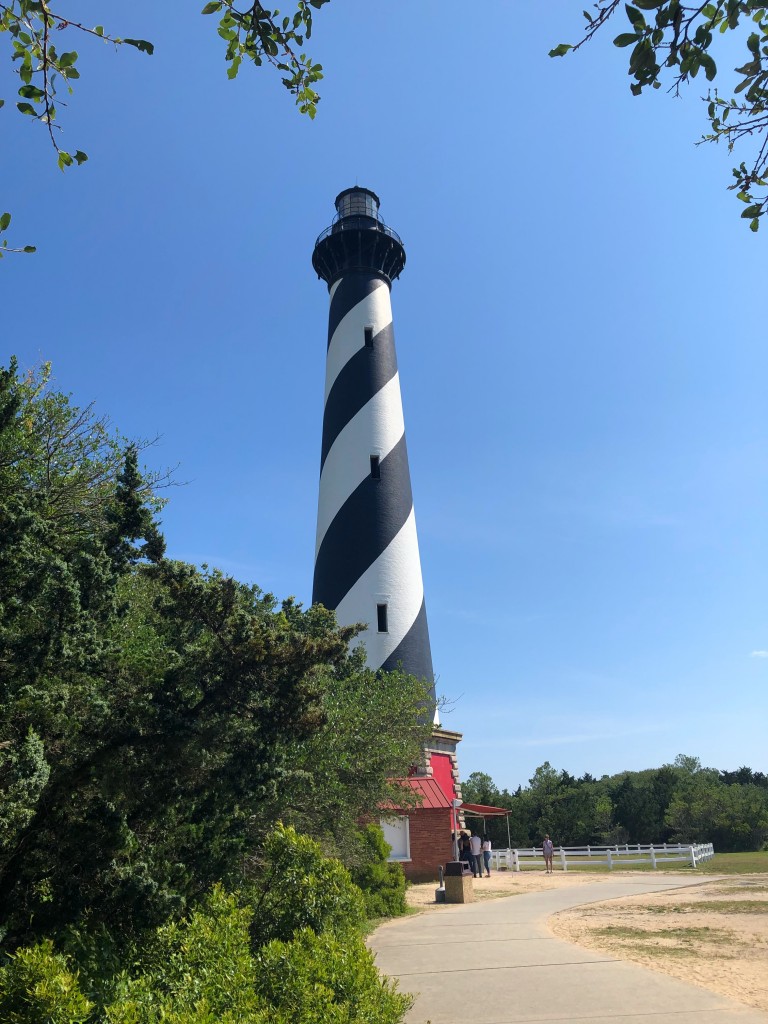 The black and white striped candy cane of Cape Hatteras Lighthouse, so distinctive and beautiful, is the tallest lighthouse in North Carolina and the tallest brick lighthouse in the world – measuring a staggering 208′ feet from the brick foundation to the top of the lighted tower! One of the most famous and recognizable lighthouses in the world, the Cape Hatteras Lighthouse protects the most treacherous stretches of the Outer Banks shoreline with a light that can be seen from 20 miles away. The 800,000-candlepower lighthouse beacon consists of a rotary beacon with two 1000-watt lamps flashing every 7.5 seconds.

The first Cape Hatteras Lighthouse was authorized in 1794 and completed construction by 1803 at 90 feet high, but wasn’t tall enough to be seen by ships passing in dangerous seas. After decades of complaints, the US Government added 60′ feet to the height of the lighthouse, making it 150′ ft. tall, and painted the bottom half bright red to make it stand out during the day. The “new” lighthouse was finished by 1853, but just a couple years later after a number of rough storms, it was in need of extensive repairs. Deciding to start from scratch, construction on the current lighthouse began in 1868, and the present-day Cape Hatteras Lighthouse was first lit on December 1, 1870.

The Cape Hatteras Lighthouse protected the waters off of Hatteras Island for over a hundred years, but by the early 1990s, the towering structure was faced with a new problem: beach erosion. The Cape Hatteras Lighthouse was moved in the spring and summer of 1999, and was successfully placed on its new foundation on July 9, 1999. It was moved 2,900 feet from its original location to a more protected spot just south and slightly inland of its original site. 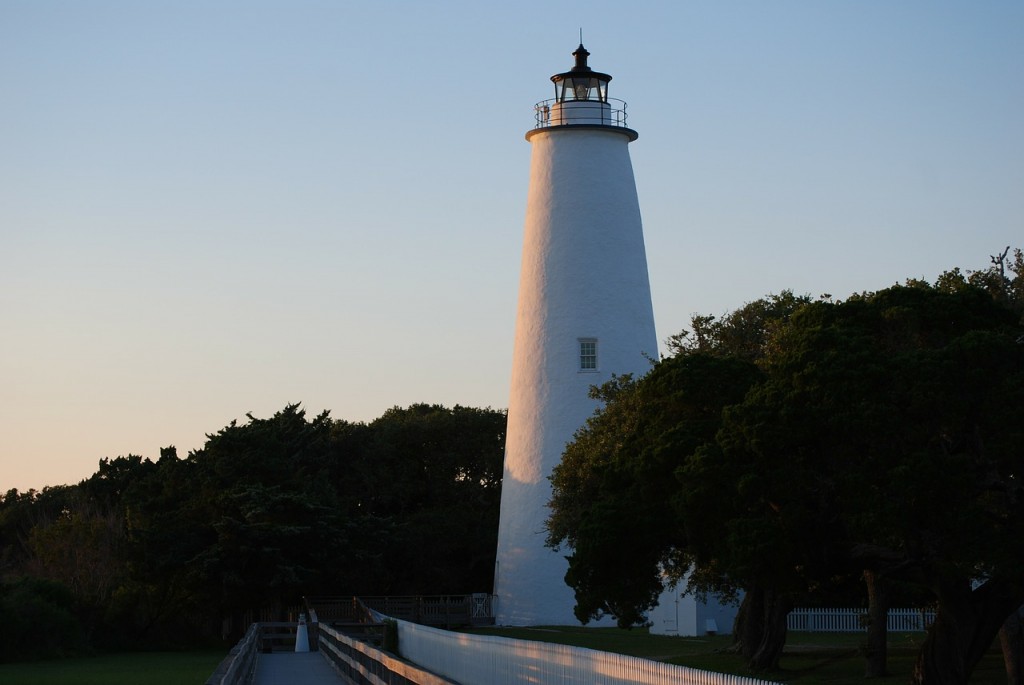 As North Carolina’s oldest lighthouse in operation and the second oldest in the United States, the Ocracoke Island Lighthouse is a popular landmark for Ocracoke Village and is accessible only by ferry. Standing at just 65′ ft. tall, its fourth-order Fresnel lens beacon can still be seen up to 15 miles into the Pamlico Sound and the Atlantic Ocean. Because the range of light did not have to be very far for ships traveling through this area, this lighthouse was significantly shorter than other Outer Banks lighthouses which had to be seen from the offshore Atlantic waters.

The stark white color is due to its unique coating that was applied during construction in the 1820s. The exterior “coat of paint” is comprised of lime, salt, ground rice, whiting, and clear glue, which was mixed with boiling water before it was applied to the brick exterior. As a result of this unique formula, it is the only totally white lighthouse on the Outer Banks.

We hope you’ve enjoyed our rundown of famous Outer Banks Lighthouses. Have you visited the Outer Banks? Did you climb the Big One? Tell us about your experience!


This article contains links to our affiliate partners. Should you purchase using these links we may receive a small commission at no additional cost to you. 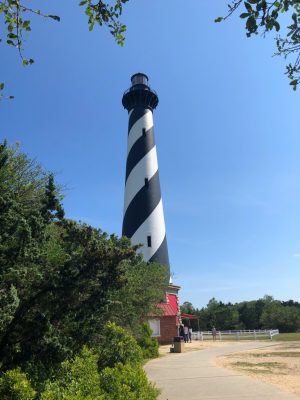