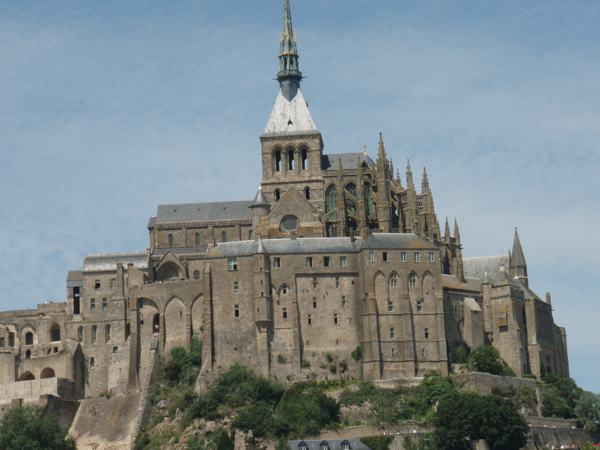 You could see it from miles away! We were driving toward the coast and there it was, rising out of the sea like something from a Star Wars movie – a city in space. Only this city was the Abbey of Mont St. Michel and it was on the Normandy Coast located on a rock in the middle of the bay.

The place was amazing! Under the church is a small village, with hotels and restaurants, all going uphill toward the abbey and the church. This is an architectural marvel – built on a pyramid shaped rock and surrounded by tidal flats. We climbed the steps – 900 in all – upward until it seemed we were nearly in the clouds – and only then were we at the first level of the church. Well worth all the effort!

We decided to get there early and take advantage of a tour given in English by one of the many tour guides on the island.  They offer many different languages so everyone can learn about the Abbey.  There were only a handful of English speaking tourists on our tour, but we were there quite early.  The early tour was great because by the time the tour buses started to arrive it was packed with tourists. We had the benefit of not only having a tour guide practically to ourselves, but to also enjoy the peace and quiet that just seems fitting for a place such as this.

The Abbey is located in the Normandy Region of France and is an easy stop from Paris.  Today you can easily approach the Abbey using the road that was built in 1878 to accommodate the influx of both tourists and pilgrims visiting from all over. Before the road was built, the only way to get to the island was walking through the surrounding waters, more like mud, where perils always existed.  Between fast moving tidal waters, quicksand, or fog banks, it was a wonder that more people did not perish on the way to the final goal of their pilgrimage.

How we got there and around town:

We used Auto-Europe’s Peugeot buy-back program to get a long term rental around Europe.  This option worked great for us because we were able to keep the car for about 10 weeks and it cost us about $1,600.  Not only did we get to pick up the car in Nice and return it in Paris, we were able to drive it all over Europe.  Costs included all insurance with no deductible.

We stayed at the Au Bon Accueil, (5 Colombel, St. Marcan, Mont St. Michel, France) where they will offer a free shuttle from the nearby rail stations.  The cost was about $20 USD per person for a 6 bed dorm, or if you would prefer a private room you will pay about $34 per person for a double room.  You can see some great reviews and pictures at Hostelworld.com.

Some of the above tips include actual services we used and that we have developed affiliate relationships with.  We had great experiences, or we would not promote them!  Safe Travels!