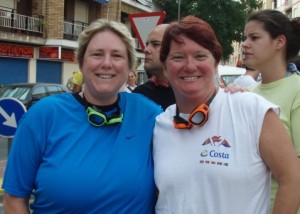 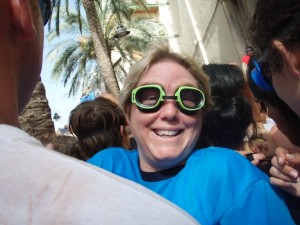 We were ready for La Tomatina – The World’s Largest Tomato Fight!
Arriving the night before to scout out the venue, we found the tiny town of Bunol, Spain to be surprisingly quiet before the expected 40,000 revelers eager to throw tomatoes at anyone close by. Vendors were doing a brisk sale of swimming goggles and duct tape, and when they explained that the goggles were necessary to see once the tomatoes started flying and the duct tape kept shoes on the feet even in foot deep gazpacho-covered streets, we stocked up!

On the appointed day, we boarded the train

But before the first tomatoes could be thrown– the ham must be brought down. The ham?

Shouts of “To The Ham!” drew brave climbers in cow costumes, wedding dresses, Superman capes and giant bananas up the thickly greased pole to try to claim the prize.

Banana “To The Ham”

When “The Ham” came down, the water cannons went off, signaling the start to another year of tossing and squishing tomatoes in Bunol, Spain.

I took the first shot to the chest and stared in horror as the red stain spread down my shirt. It took a second, but I realized I wasn’t shot – La Tomatina had begun! A riot of frenzied tomato tossing, squashing, slipping and sliding ensued as trucks dumped tons of ripe tomatoes at our feet. 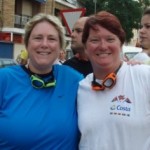 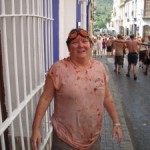 AFTER the tomato fight!

For one hour, the streets of this tiny town become thick with a slurry of tomatoes, t-shirts, and flip-flops  (those NOT duct taped to the feet!).  Our festival hosted a crowd of 39,000 people, 140 tons of ripe, squishy tomatoes, and locals who cover everything in sight with large sheets of plastic to protect it from the onslaught.

For days afterwards, we found tomato seeds all over our bodies, despite numerous showers and trips to the local laundry. We had

Would we do it again? Are you crazy??