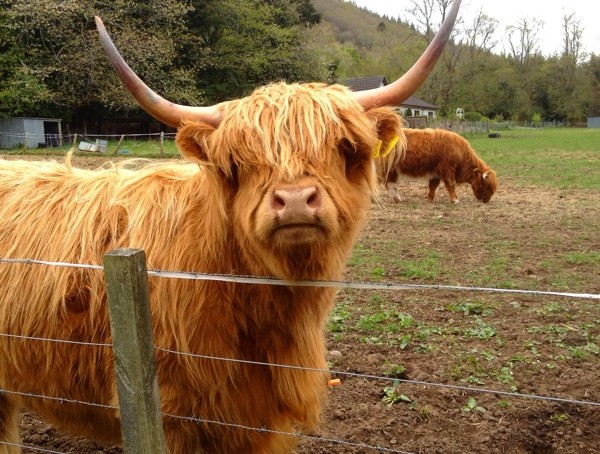 The first Aberdeen Angus Herd book was published in 1862, pre-dating the Highland cattle registry by 23 years. 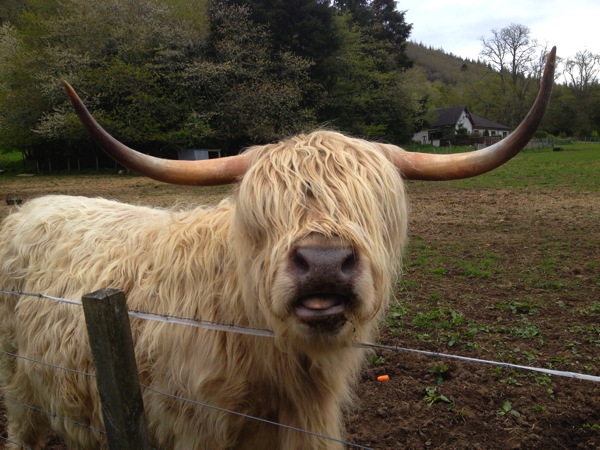 A visit to Scotland has always been “on-the-list”, mainly due to the appeal of Scottish pubs and the history of its lively cultural cities of Glasgow and Edinburgh. However, I wasn’t prepared for the haunting landscapes of the Highlands, the spectacular castles that defined the growth of a country, 30,000 lovely lochs (lakes), or the incredible warmth and pride of the people. I also wasn’t prepared to not understand over half of what was being said to me at any given time! New words were being thrown about faster than I could process them and more than once I had to ask with a puzzled, “What was that again?”

Our first day of exploring was a “DREACH DAY” meaning rainy weather and by early afternoon, we were “DROOFIN” in need of a drink. The “GLASWEGIANS” people from Glasgow were most hospitable. When asked how long the rain might last, we heard “WHIT’S FUR YE’LL NO GO PAST” that I believe meant whatever will be, will  be. So as not to be thought of as a “BAMPOT” (idiot), I just nodded sagely and sipped my T (Tennents). 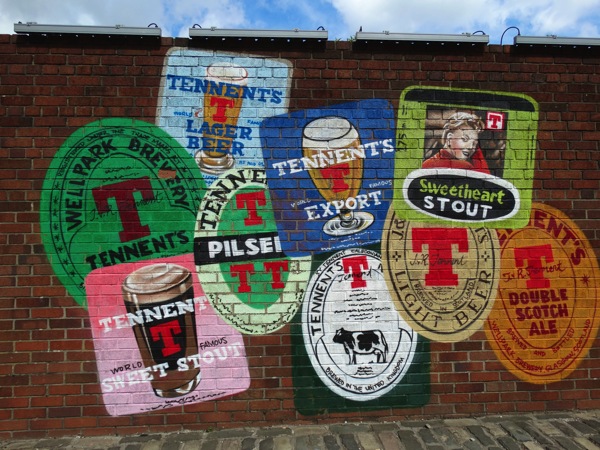 Haggis – the traditional Scottish dish of leftover sheep’s parts (offal). You know – the heart, liver, lungs and such mixed with a little onion, oatmeal and spices and proudly served as food. Haggis is found everywhere in Scotland and on almost every menu in some form. Even the cookies (biscuits) here are haggis-flavored! 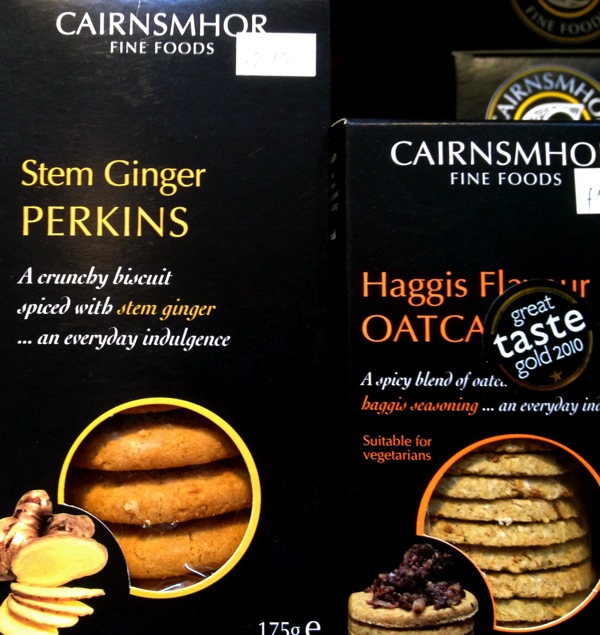 I was skeptical. I was, in fact, a little frightened. But curiosity prevailed and I gave haggis a try. I found “Haggis Bon-Bons” on the menu and was assured (by a reputable Scotsman) that they were delicious. Little fried balls of offal. Sure. 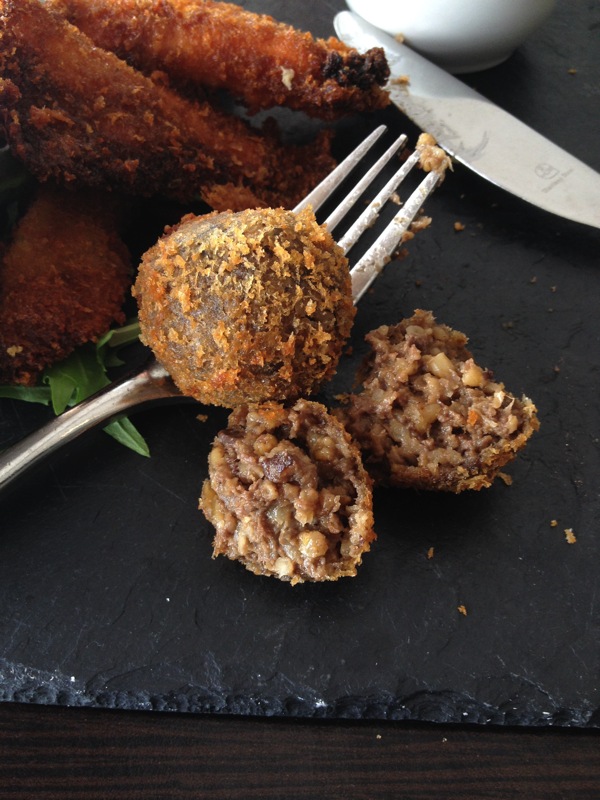 Haggis is an acquired taste and I’m proud to say I think I’ve acquired a taste for it. A bit squishy on first bite, but very flavorful and I would order it again. Maybe.

Hairy Coos – the loveable Highland cow! I fell in love at first sight and if I could have brought one home I would have. Coo is the Scottish word for cow and the hairy part is clearly evident from those furry faces. The ones we happened upon had a sweet tooth for ginger cookies and weren’t shy about making their wishes known. 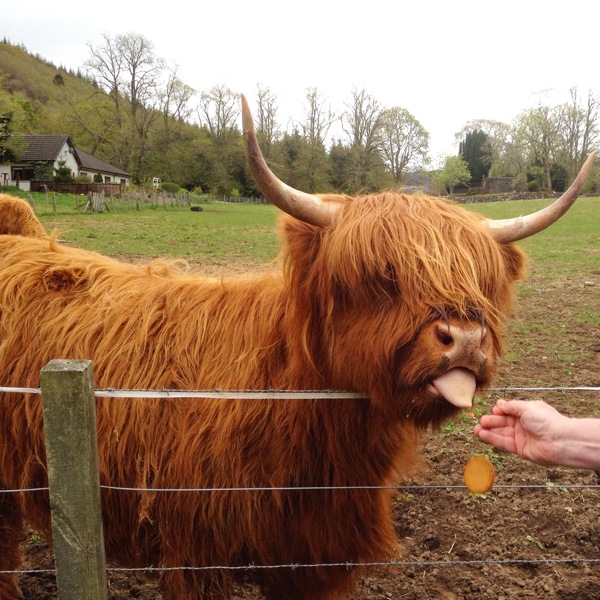 This Scottish breed of cattle originated in the Highlands and Western Isles where their hardiness helped them survive the harsh winds and weather of the area. The Highland cattle registry (“herd book”) was established in 1885. This is the oldest herd book in the world, which makes them the oldest registered cattle in the world. 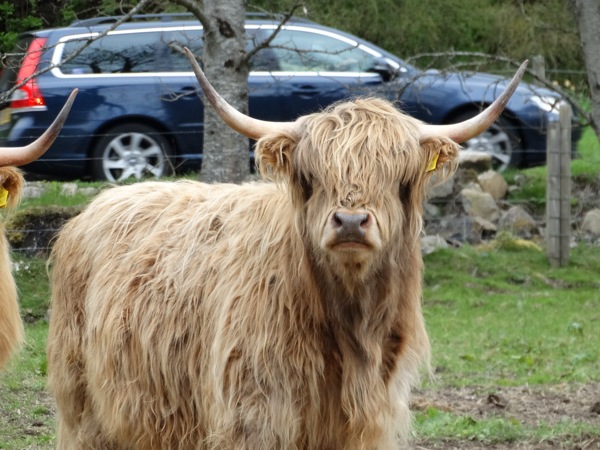 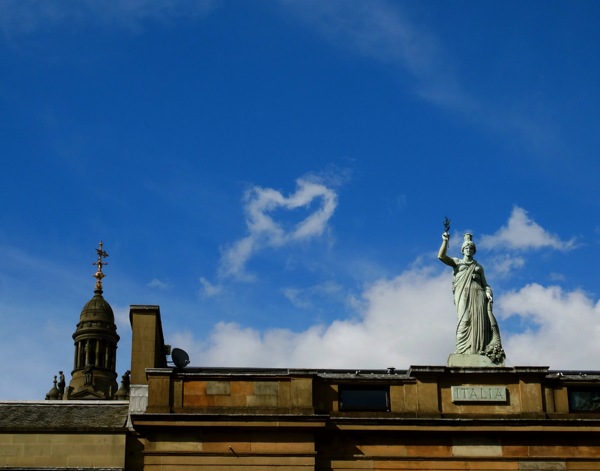