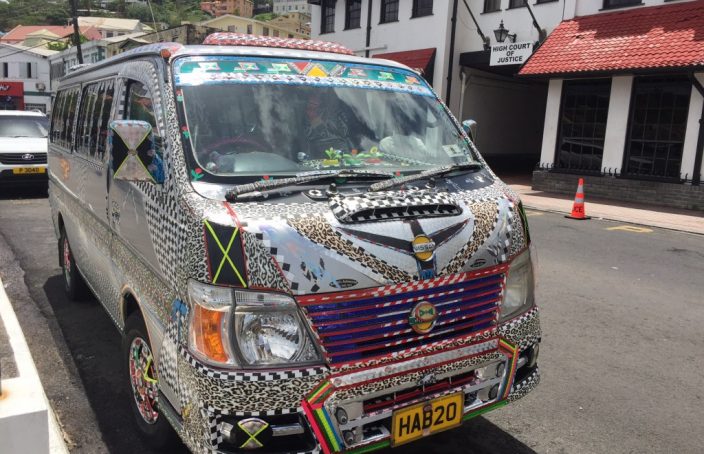 love that you can hear the bus coming before you can see it. You make Grenada very appealing. Guess I…

You’ll know a Grenada bus is coming long before you actually see it. Pounding Caribbean music punctuates the air and in a whirlwind of sound and arms motioning you forward, your transport screeches to a stop to whisk you away to your chosen destination.

I’d heard a little about the Grenada bus system before we arrived, so while we were house-sitting I was excited to try out this unique life form. Touted as one of the best ways to experience a full spectrum of island culture and cadence, the Grenada buses are a riotous, lively mix of non-conformity. Each bus has it’s own personality and sometimes, even it’s own name. Caribbean soca and reggae music livens the mood. But hang on tight because these mean Grenada machines can even climb hills that will make you think you’ve gotten on the roller coaster instead of the bus!

My first reaction when our ride flashed past us was “This is a van! Where’s the bus?” That’s because in Grenada the “buses” are all vans. Impossible to ignore, you’ll find them buzzing around, tooting horns and blaring music all over town. These vans are equipped with a small window on the passenger side behind the driver’s seat. That’s where the conductor sits – or usually hangs out of the window – playfully cajoling everyone he passes into hopping in for a ride as the driver honks the horn repeatedly to add to the fun cacophony.

“Bus? Bus?!” He asks from the window as he passes (sometimes the ‘asks’ become ‘begs and pleads’ if the day has been slow) complete with accompanying arm motions all designed to evoke the highest levels of sympathy.

Often the conductor is the actual owner of the bus (van), so it’s in his best interest to coax as many people as possible in for a ride. You may think the bus couldn’t hold another soul, yet when a group of school kids wave him down, you may find a smiling, uniformed child propped on your lap. This is called “dressing up” and the conductor may say “make yuhself small” and miraculously there is room for one more person. It’s all in good fun and everyone we’ve ever encountered has been gracious and polite. 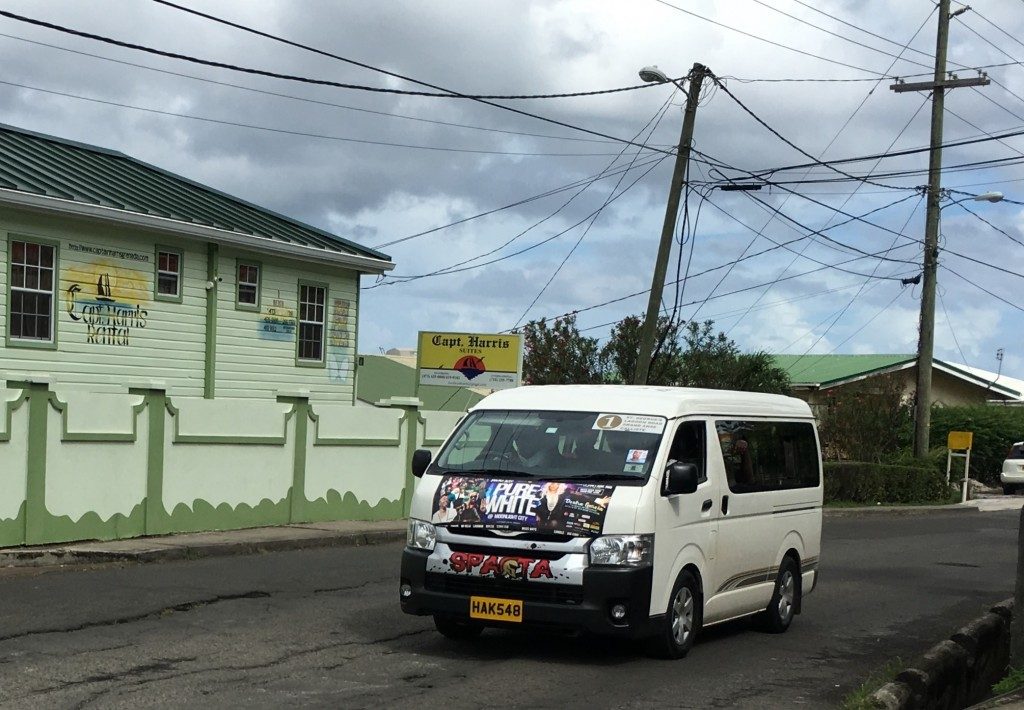 Bus #1 – See the sticker on the front window 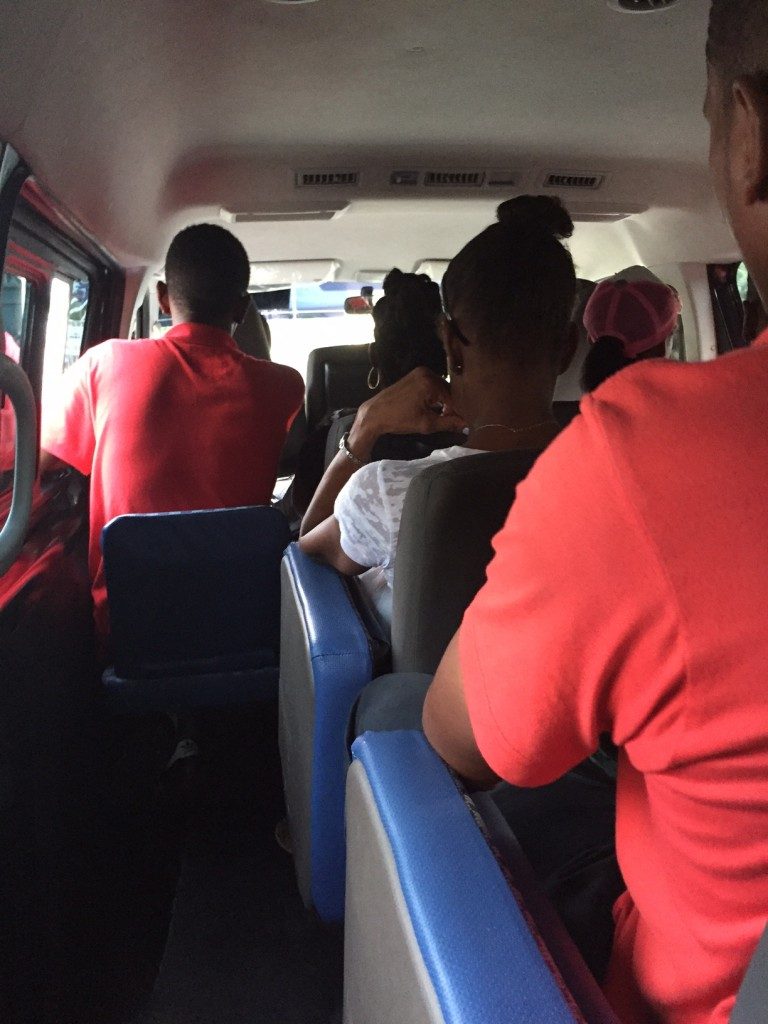 The conductor from his window, coaxing everyone in a for a ride!

Getting off the bus…

There are no set stops as the bus hurtles down the road, but there are “bus stops” where the bus can be requested to open the doors and let you tumble out. When you’re getting close to your stop, you knock loudly on the side of the bus (or on the roof if you’re squashed in the middle) and shout “BUS STOP!!” over the music. This creates a sudden chain reaction. The conductor snaps his fingers loudly or bangs on the side door to get the drivers attention and also shouts “Bus Stop!”.

There is no hierarchy of stops on the bus. Invariably, the tiny lady packed all the way in the back on the opposite side of the door will need to get off at the first stop. Now everyone blocking her files out of the bus and waits patiently until she’s off and pays her money, then files back in.

Once you’ve reached your stop, the bus quickly swerves toward a tiny pull-off on the busy road and you wait while all the people beside you pile out of the bus. Your turn to peel yourself from the seat and it’s time to pay.

Traveling by bus is one of the cheapest ways to get around on the island. Local bus fares start at $2.50 EC (about $1 USD) and never exceed $10 EC ($4 USD) even if you’re traveling completely across the island. The #1 bus covers the coastal side from near the airport through Grand Anse Beach to St. George’s town. Numbers are clearly marked on the front, so you’ll know the route by the bus number. You pay when you get off or just before you announce your “bus stop”.

Not only is the bus in Grenada a mode of transport, it’s also a means for socializing. You’ll share smiles with your fellow passengers, but often very few words as the music will be a powerful force. These are called Reggae Buses for a reason. The typical Caribbean music is loud, thumping, and totally hip! It’s a contest among bus drivers to see who can play the loudest and the more bass the more smiles. Soon you’ll be swaying in your seat as the island rhythms course through your very bones! 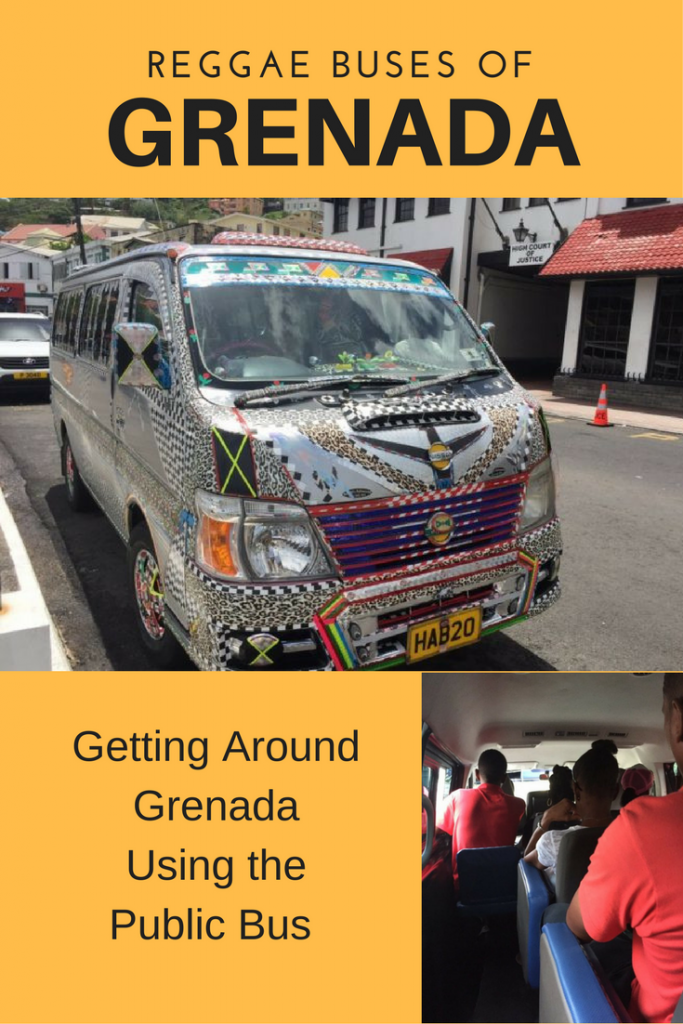