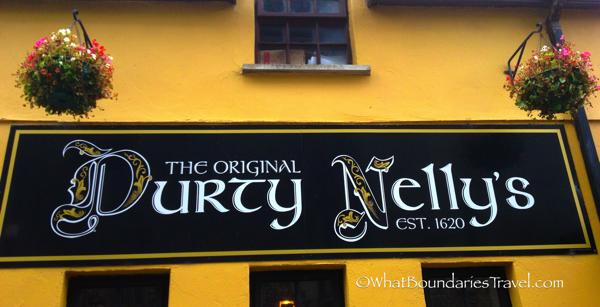 I love Durty Nelly's. My husband's family is in Limerick so we went here during our first trip to Ireland… 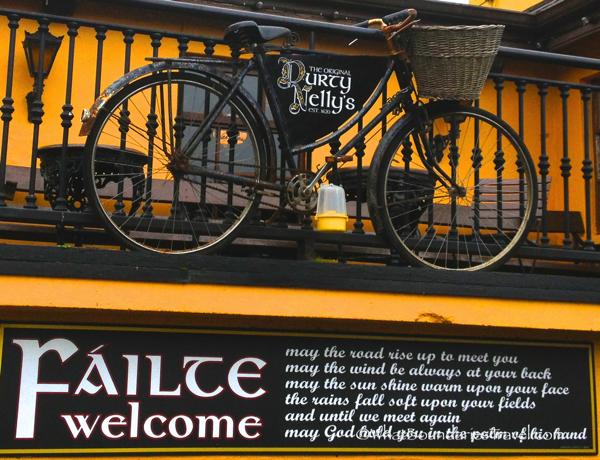 Almost as famous in Ireland as Molly Malone herself, Durty Nelly holds a special place in the hearts of drinkers from around the world! Today, her namesake pub Durty Nelly’s near Bunratty Castle continues her legacy with the history and character we enjoy so much from Ireland.

Since 1620, this charming pub has inspired stories, smiles, and genuine Irish hospitality. Don’t miss giving Durty Nelly a visit next time you’re in Ireland – you won’t be disappointed!

Be sure to read Durty Nelly’s Blessing below…

From The History of Durty Nelly’s…
“Many many moons ago in the misty past of Cratloe’s rolling country side there lived a buxom lady, tall in stature, but shapely and appealing to all.  She was known simply as Durty Nelly… a name that puzzled all who had the good fortune to be granted her welcome but soon became apparent…

Times were hard in Ireland but one could say that Durty Nelly was wily and always found a way to make ends meet. She was keeper of the toll-bridge over the river Owengarney which flowed outside her window on its way to join the Shannon.

All visitors who sought to cross the bridge would have to pay their dues to Nelly – those who could not pay in cash paid in kind with the presentation of a chicken, a few eggs, a piece of home-cured bacon or even, legend has it, a bit of ‘comfort’ for the lady herself.

Durty Nelly was a woman of considerable charm, known to the virile men of the day, from Galway to Cork, Dublin to Limerick. The highway into and out of the city of Limerick was always open to these … toll or no toll …Durty Nelly’s hospitality to the many travelers coming across the bridge gained her a place in many a man’s fond memories, handed down through the centuries.

Durty Nelly was also renowned for her little shebeen – a special corner of the house overlooking the river where she kept a jar of whiskey, the ‘good stuff’ on hand to warm the bellies of the tired and exhausted journeymen. There came an unfortunate night when one of those travellers, a rogue from Kilrush, crept in during the night and stole poor Nelly’s savings, all the gold coins she had collected at the bridge.

The following evening she went to bed broken-hearted and after a night of fitful sleep awoke with a start. Occupying her mind was a clear impression of a new recipe for whiskey.  She set to work straight away, filling four of her best earthen jars from her distillery in the woods.  As she laboured over the concoction she became more and more convinced that there was magic to this brew.

Only a short time later she came across an old Irish Wolfhound, on his last legs outside her front door. He was weak and feeble and was not long for this world.  Without really knowing why, Durty Nelly poured a drop of the poteen from one of the urns and carefully rubbed it into the dog’s muscles.  She left the dog to rest and took her place on the curved wall where she waited daily for the tolls. In the heat of the midday sun, she started to drop off.

Two or three hours later, she was disturbed from her slumber by a warm wet feeling in her palm – with a shock she realised it was the Wolfhound, licking her hand.  He raced across the bridge exuberantly, showing no sign of his previous malaise. This extraordinary afternoon had not gone unnoticed by Nelly’s neighbours in Bunratty and news quickly spread that Durty Nelly had a special potion, one which would bring the gift of new life.

And so they came in droves from all over the country seeking “the cure” for that lame horse; the sick bainimh; the slowing greyhound or the muscle-bound athlete.  Each visitor left with a renewed vigour, cured of all ills. The Little House by the bridge grew with the increased trade and became a landmark in Munster for the high quality of its refreshment in food and drink.

On day a young woman from Rineanna (now Shannon International Airport) came to see Durty Nelly with a broken heart. She was married for three years but sadly remained childless.  She confessed to Nelly that she believed it was because her husband lacked any warmth in his attentions. She wanted to try the cure on him, to see if he too could be brought ‘back to life’ within their marriage..

From the first sip of the smooth liquid, the woman’s husband was a changed man. His wife could never complain of his powers as a loving husband. His virility thrilled her  and resulted in the birth of 3 sons and 2 daughters within six years….. and she still retained her beauty in body and charm.

News of the miracle brew spread far and wide across Ireland and Durty Nelly’s ‘cure’ had found a place on the shelves of her hostlery as the drink to cure all ills – with a tot of the powerful drink, men became virile and strong, thrilling their women and gaining triumph in all battles.

Durty Nelly had discovered one of Ireland’s best-loved secret brews, famed for its purity, strength and health-giving powers; poteen.

Times have changed and poteen is no longer a legal drink in Ireland. Because of its unusual power and danger if consumed to excess, it had to be ‘officially’ outlawed…. But to this day it is distilled among the hills and valleys of the land. It continues to relieve pain and restore new life – there is a many a champion hurler, footballer, athlete, and even racehorse whose rubdown is well-laced with poteen.

Down through the years, the house of Durty Nelly has thrived. It has brought refreshment and comfort to many a weary traveller and it has remained the noted gateway to the stunningly beautiful West of Ireland.  Men and women who saw plantations, penal laws, great hunger and countless battles over time have traversed this famous bridge and stopped for a quick drop in the comforts of this famous tavern.

Durty Nelly’s hospitality, warmth and generosity of spirit have remained in this most welcoming of public houses for the centuries since her death.  When you stop by some afternoon, think of her and toast her memory with a tot of the ‘good stuff.’”

May the road rise up to meet you. May the wind be always at your back.
May the sun shine warm upon your face, the rains fall soft upon your fields
and until we meet again, may God hold you in the palm of his hand.