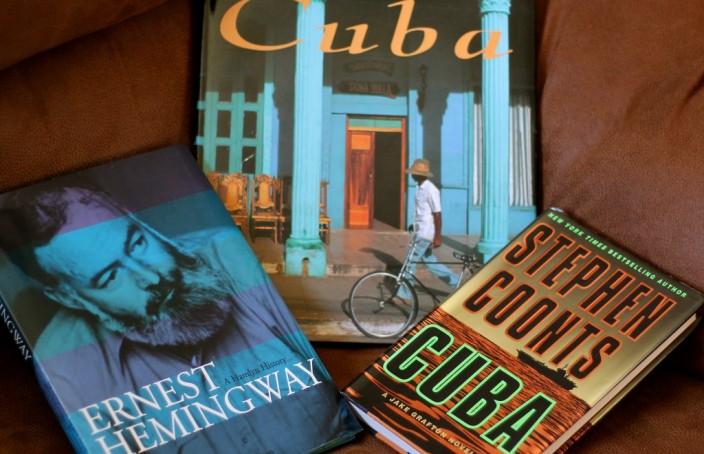 If you’re anything like me, Cuba provides a strong fascination of culture, politics, and history. The Forbidden Cuba mystique surrounds the island and the people who live there. In the weeks before our trip to see Cuba for ourselves and make our own opinions, I’ve been eager to read everything I can to get a deeper view into exactly what it is that makes Cuba so special. I’d like to share some of what I’ve found for a great pre-trip Cuba reading list! 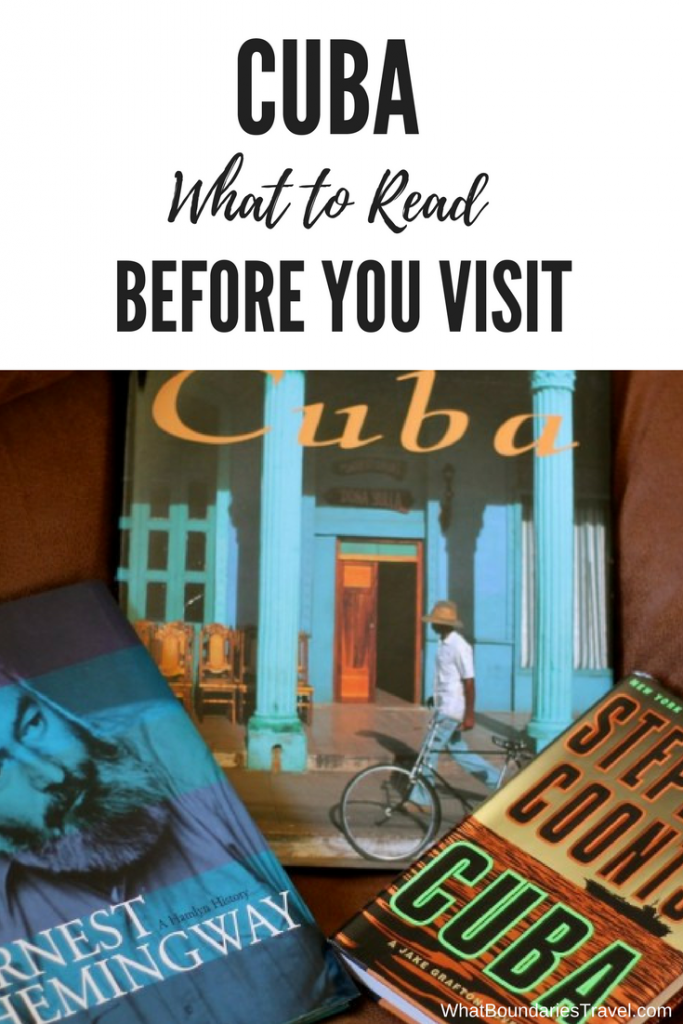 What better way to learn of the life and times of a country than through the people who lived there and have experienced it firsthand? Picking up a memoir or travelogue before you go to Cuba is a wonderful way to get a deeper glimpse. From mundane housewife activities to running blockades, this selection will whet your appetite for a good Cuban story.

“In this collection of her diary entries, housewife Isadora Tattlin describes the four years she and her family spent living in Cuba in the 1990s while the Communist country was adjusting to a liberalized economy and a shift in tourist policy. Living amid severe economic imbalance, “tourist apartheid” imposed upon locals, shortages of every conceivable household need (Tattlin’s list of supplies extends over two pages) and a social architecture frozen in the 1950s, Tattlin and family inhabit an upscale Havana townhouse accompanied by a staff of seven.”

Trading with the Enemy: A Yankee Travels Through Castro’s Cuba

“Havana knew me by my shoes,” begins Tom Miller’s lively and entertaining account of his sojourn for more than eight months traveling through Cuba, mixing with its literati and black marketers, its cane cutters and cigar rollers. Granted unprecedented access to travel throughout the country, the author presents us with a rare insight into one of the world’s only Communist countries. Its best-known personalities and ordinary citizens talk to him about the U.S. embargo and tell their favorite Fidel jokes as they stand in line for bread at the Socialism or Death Bakery. Miller provides a running commentary on Cuba’s food shortages, exotic sensuality, and baseball addiction as he follows the scents of Graham Greene, José Marti, Ernest Hemingway, and the Mambo Kings. The result of this informed and adventurous journey is a vibrant, rhythmic portrait of a land and people too long shielded from American eyes.”

“Intrigued by Cuba, Zoe Bran visits this country of contradictions and interweaving history and current events, personal and wider viewpoints, she paints a vivid and compelling picture of contemporary Cuba.”

Waiting for Snow in Havana: Confessions of a Cuban Boy

“Have mercy on me, Lord, I am Cuban.” In 1962, Carlos Eire was one of 14,000 children airlifted out of Havana—exiled from his family, his country, and his own childhood by Fidel Castro’s revolution. This stunning memoir is a vibrant and evocative look at Latin America from a child’s unforgettable experience.

Waiting for Snow in Havana is both an exorcism and an ode to a paradise lost. For the Cuba of Carlos’s youth—with its lizards and turquoise seas and sun-drenched siestas—becomes an island of condemnation once a cigar-smoking guerrilla named Fidel Castro ousts President Batista on January 1, 1959. Suddenly the music in the streets sounds like gunfire. Christmas is made illegal, political dissent leads to imprisonment, and too many of Carlos’s friends are leaving Cuba for a place as far away and unthinkable as the United States. Carlos will end up there, too, and fulfill his mother’s dreams by becoming a modern American man—even if his soul remains in the country he left behind.”

Give me underwater shipwrecks in the depths of Havana Bay and racy spy thrillers set amid the political turmoil of post-Castro Cuba and I’m happy. Historical fiction is a fun way to escape into a book and learn something at the same time. As a big adventure and mystery fiction fan, two of my favorites are Cuba by Steven Coonts and Havana Storm by Clive Cussler. 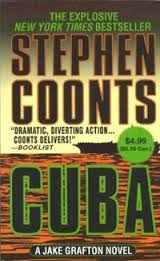 “Stephen Coonts’ bestselling novels takes readers into the heart of harrowing, pulse-pounding action, whether on land, on sea, or in the air. Now, this master of full-tilt, blockbuster suspense turns into a lush setting 90 miles from U.S. soil. In Cuba, Fidel Castro lies dying. Human sharks are circling. And one man has his finger on the trigger of a weapon that will change everything…” 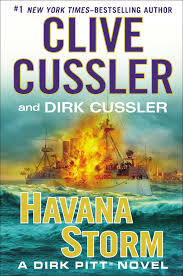 “While investigating a toxic outbreak in the Caribbean Sea that may ultimately threaten the United States, Dirk Pitt unwittingly becomes involved in something even more dangerous—a post-Castro power struggle for the control of Cuba.”

The politics of Cuba are as intriguing as the man Castro himself. Amid the music, rum, and art of Cuba there is always the politics. We are fascinated by Fidel, Che, Raul and the many players of the Communist regime who shape the everyday lives of the Cuban people. To learn how they came to wield such influence and what the future holds from this  country’s tumultuous past.

Che: A Memoir by Fidel Castro

“Castro vividly portrays Che, the man, the revolutionary and the thinker, describing in detail his last days with Che in Cuba, giving a remarkably frank assessment of the Bolivian mission.”

Fidel and Che: A Revolutionary Friendship

“While much has been written about them both, surprisingly little is known about their personalities, and even less about the 12 years of their unique and highly consequential relationship, during which they linked arms in one of the world’s greatest revolutionary movements. Fidel and Che follows them on their dramatic journey from the safe houses of Mexico’s political underground in the 1950s, where they began hatching their plan for revolution, to the theatre of war in the Cuban mountains, to the paneled offices of a new government (the Bay of Pigs and Cuban Missile crises happened on their watch), and to the eventual rupture of their friendship, as Che left Cuba to pursue his revolutionary dreams, only to be assassinated by the CIA in 1966.”

“With this masterful work, Louis A. Perez Jr. transforms the way we view Cuba and its relationship with the United States. On Becoming Cuban is a sweeping cultural history of the sustained encounter between the peoples of the two countries and of the ways that this encounter helped shape Cubans’ identity, nationality, and sense of modernity from the early 1850s until the revolution of 1959.”

Cuba in the American Imagination: Metaphor and the Imperial Ethos

“For more than two hundred years, Americans have imagined and described Cuba and its relationship to the United States by conjuring up a variety of striking images–Cuba as a woman, a neighbor, a ripe fruit, a child learning to ride a bicycle. Louis A. Perez Jr. offers a revealing history of these metaphorical and depictive motifs and discovers the powerful motives behind such characterizations of the island as they have persisted and changed since the early nineteenth century.”

Cuba was home to Ernest Hemingway from 1939 to 1960 and Hemingway’s Finca Vigiá estate is top on our list of “must-see” places to explore while we’re visiting. It was during his time in Cuba that three of his most memorable works were completed – For Whom The Bell Tolls, The Old Man and the Sea, and A Moveable Feast.

“In the preface to A Moveable Feast, Hemingway remarks casually that “if the reader prefers, this book may be regarded as fiction”–and, indeed, fact or fiction, it doesn’t matter, for his slim memoir of Paris in the 1920s is as enchanting as anything made up and has become the stuff of legend. Paris in the ’20s! Hemingway and his first wife, Hadley, lived happily on $5 a day and still had money for drinks at the Closerie des Lilas, skiing in the Alps, and fishing trips to Spain. On every corner and at every café table, there were the most extraordinary people living wonderful lives and telling fantastic stories.”

For Whom the Bell Tolls

“The story of Robert Jordan, a young American in the International Brigades attached to an antifascist guerrilla unit in the mountains of Spain, it tells of loyalty and courage, love and defeat, and the tragic death of an ideal.”

The Old Man and The Sea

“The Old Man and the Sea is one of Hemingway’s most enduring works. Told in language of great simplicity and power, it is the story of an old Cuban fisherman, down on his luck, and his supreme ordeal — a relentless, agonizing battle with a giant marlin far out in the Gulf Stream.”

For a wonderful overview of the life and works of Hemingway, I’ve enjoyed Ernest Hemingway – A Hamlyn History. It’s an oldie I found at the library, but has many photos and stories of his fascinating and tumultuous life.

This is just a small sampling of all the wonderful reads out there to dig into. We haven’t even had the chance to cover the music, culture, and the poetry. Cuba is such a diverse country! But this Cuba reading list will get you going in the right direction – and maybe along the way we’ll all find ourselves closer to understanding what it is exactly that has us so interested. Or perhaps it would be better if we just kept wondering…

Have you come across any favorite books to add? Please share them in the comments below and we’ll add them to the list!