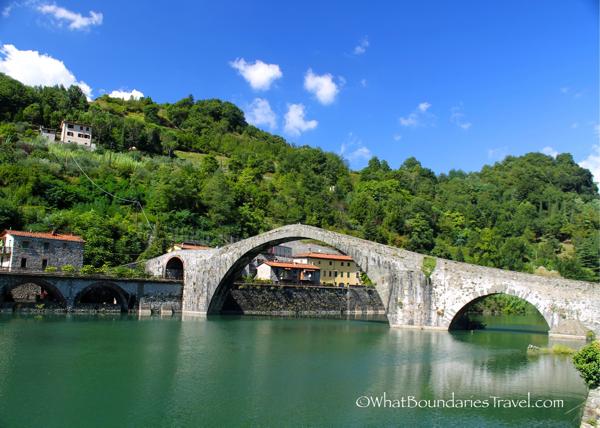 The Devil’s Bridge! What a sinister name for such a beautiful medieval bridge. But on further study, we found that this is just one of a series of bridges throughout Europe known as Devil’s Bridges. In fact, this one was renamed Ponte della Maddalena for the statue of Magdalene that once rested on the foot of the bridge.

Commissioned by the Countess Matilda of Tuscany around 1080-1100, this architectural wonder served as an important river crossing on the Via Francigena or pilgrimage route for those making the journey to Rome from France. In 1670, the General Council of the Republic of Lucca issued a decree prohibiting passage over the bridge with heavy millstones and sacks of flour in order to preserve the structure. Crossing the river Serchio near the Italian province of Lucca, this historic and charming bridge is also described in a 14th-century novella by Giovanni Sercambi.