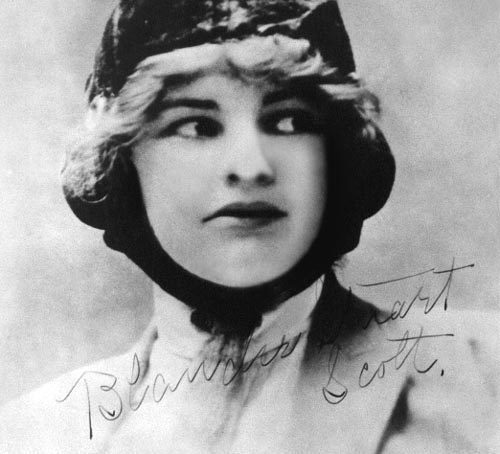 This is really good, I think we need this kind of story to read, thanks for sharing :) 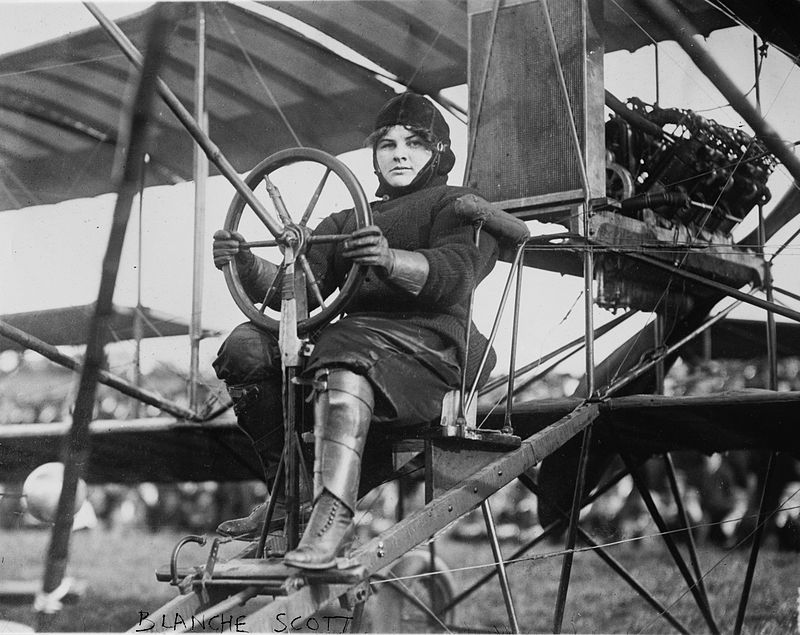 While putting in the research time to get a better feel for what made Blanche (Betty) Stuart Scott love to fly, I learned the meaning behind several important terms.

Barnstormer. A barnstormer pilot is one who travels through small towns or rural areas performing daring feats in the air. The name came from the early practice of flying the plane low through the open doors of a barn. An extremely dangerous occupation for anyone, performing death-defying feats to impress an audience and meant to show the public exactly what this new form of transportation called an airplane was all about.

Indefatigable. A term I found synonymous with Blanche Stuart Scott.  A person who tirelessly persists toward a goal or effort. Blanche’s determination to learn to fly, to perfect her flying techniques, to make a place for herself in a world dominated by men, and to put in the hours upon hours necessary to become one of the most famous early flyers – either male or female – shows her indefatigable spirit in every way.

Before She Became a Pilot

At the age of 13, Blanche was cited by the Rochester local authorities for driving her father’s automobile around town. However, since there was not yet a minimum age for driving established, she was allowed to continue driving around the countryside attracting attention. Her love for cars (and her spirit of adventure) only grew from there. 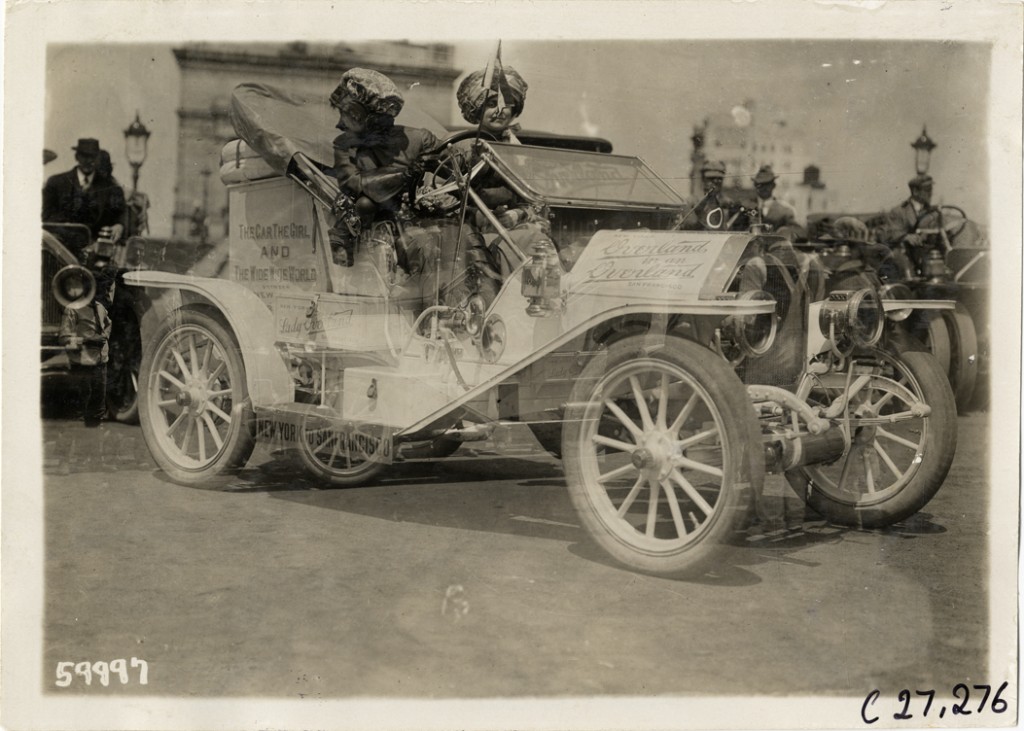 After finishing school, Blanche’s adventurous spirit caught the attention of the Willys-Overland Company (designer of the Willys Jeep). The car company offered her the chance to drive across the country to document how easy is was to make such a trip. The car she was loaned was dubbed the “Lady Overland.” It was a media frenzy in Times Square on the day she was scheduled to start the journey. Fans and dignitaries thronged the streets.

Miss Scott, with Miss Phillips as only companion, starts on long trip with the object of demonstrating the possibility of a woman driving a motor car across the country and making all the necessary repairs en route. Miss Blanche Stuart Scott yesterday started in an Overland automobile on a transcontinental journey which will end in San Francisco.

At the time, there were only 218 miles of paved road outside of the cities of the United States. Blanche’s promotion trip covered over six thousand miles, zigzagging between Overland dealers. She was accompanied by newspaperwoman Gertrude Phillips, who did not drive, but kept notes and filed press releases as they headed westward. They left New York on May 16 and arrived in San Francisco on July 23, 1910. 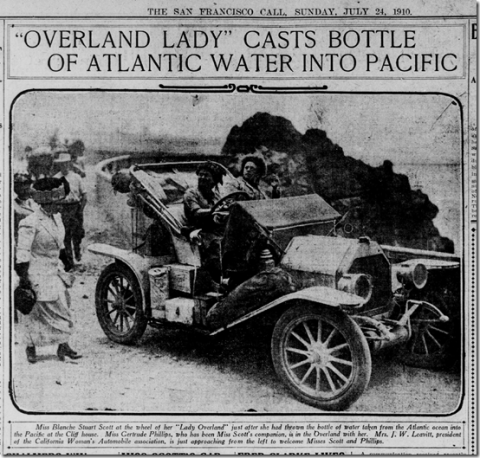 It was in Dayton, Ohio on her famous road trip when Blanche would see an airplane for the first time. The Wright Brothers were there giving flying lessons. As she watched two airplanes flying above a field, she notes in her autobiography “I looked at them and thought how perfectly idiotic they were.” She later recalled, “Anybody who’d do that was crazy as a loon.”

The publicity surrounding Blanche’s automobile journey brought her to the attention of airplane show promoter Jerome Fanciulli. Jerome managed the Exhibition Flying Team of  Glenn Curtiss (considered to be the founder of the US aircraft industry) and thought Blanche would be the perfect protege. He convinced her to take a chance on this new exciting mode of entertainment. “The idea of being a nobody and a nothing in New York’s millions had irritated me,” Blanche remembers, “Here was a chance for the brass ring.” 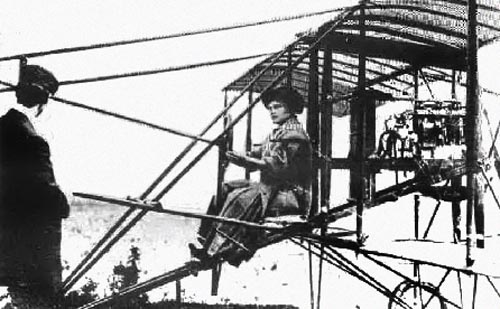 However, it was harder to convince Curtiss to give her lessons. No woman had done this before in the United States. If something went wrong, the bad press could be devastating to his Exhibition Team. The plane was a single seater, so the student would have to fly alone. Finally, Curtiss reluctantly agreed to provide her with flying lessons in New York. She was the only woman to ever receive instruction directly from Curtiss.

“I learned in two days,” Blanche recounts. “The plane had a 33-horsepower motor and we sat out in front. The technique was for the instructor to way ‘good bye and God bless you,’ and you were on your way. The had you cutting grass – flying just above the ground – which we know today is very dangerous.”

To protect Blanche while she was learning the basics of flight, Curtiss fitted a block of wood (called a limiter) on the throttle system to keep the plane from becoming airborne while she practiced steering, taxiing, and “grass-cutting”. Then on September 6th, as she practiced, the limiter malfunctioned (or an errant gust of air caught her aircraft) and she soared to an altitude of nearly 40 feet! Thankfully, she was able to execute a gentle landing in the field.

Seated in what she called “an undertaker’s chair” in front of “a motor that sounded like a Whirling bolt in a dish pan,” Blanche wore specially-made bloomers filled with three petticoats. 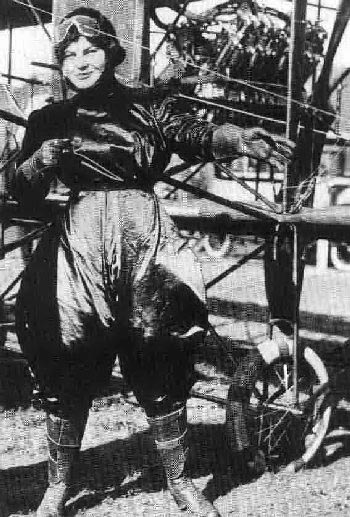 Blanche’s first flight was short and possibly unintentional, but she is credited by the Early Birds of Aviation as being the first woman to pilot and solo in an airplane in the United States. However, there is some discrepancy among aviators that the flight of Bessica Medlar Raiche on September 16, 1910 might be the first – as hers was accredited by the Aeronautical Society of America and Blanche’s flight was not.

At the time, Blanche wasn’t concerned about record books. She was devoted to learned her craft and becoming a part of the Glenn Curtiss Exhibition Team. She made her first public appearance in Fort Wayne, Indiana on October 24, 1910. She was billed as the “Tomboy of the Air” and “The Most Famous Aviatrix in the World”. 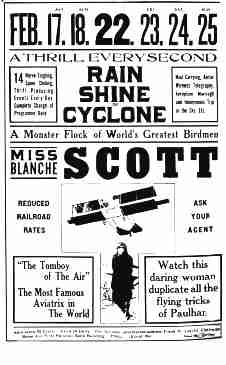 During her exhibition career Blanche Stuart Scott typically earned up to five thousand dollars a week performing dangerous stunts of flying upside down and dropping in a “death dive” from over 4000 feet in the air! After World War I, she gave up stunt flying and barnstorming and wrote for the movies for several years, became a radio commentator, an assistant manager of a radio station and then a special consultant for the Air Force museum at the Wright‐Patterson Base. 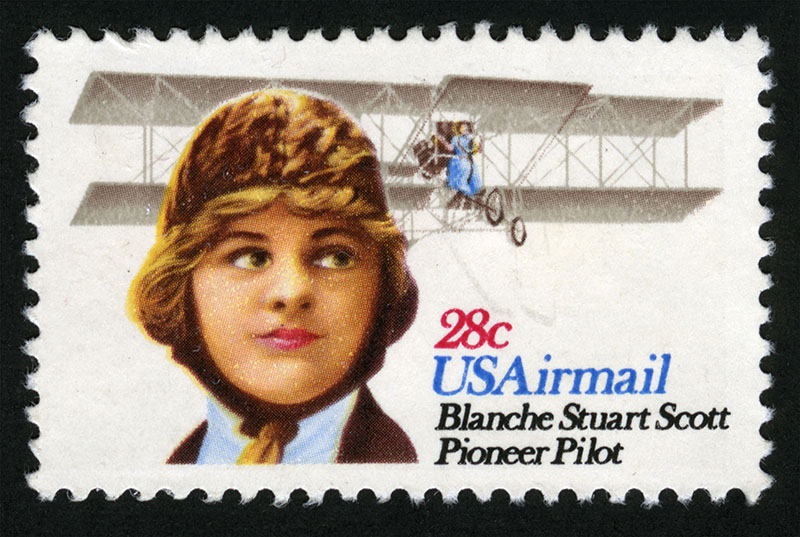 A Woman of Many “Firsts”

Blanche Stuart Scott was born in Rochester, New York on April 8, 1884. She died at the age of 84. During her inspirational life she racked up many accomplishments and led the field for women flyers.

From her induction into the National Women’s Hall of Fame

Born in Rochester, New York, Scott was a pioneering aviatrix, becoming the first American woman to take a solo hop into the air, although her flight is not regarded as official. In 1910, she became the first woman to drive an automobile coast to coast in her car – the “Lady Overland”. Scott was also the first and only woman to take flying lessons from Glenn Curtiss, later flying with the Curtiss Exhibition Team and earning the nickname “Tomboy of the Air”. Blanche Stuart Scott’s life spanned the era when airplanes were just being invented and given trials, to the moment she saw Neil Armstrong walk on the Moon. 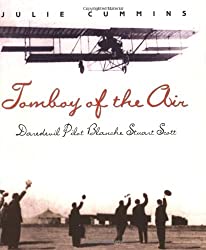 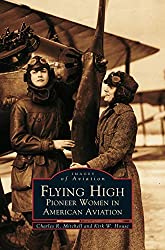 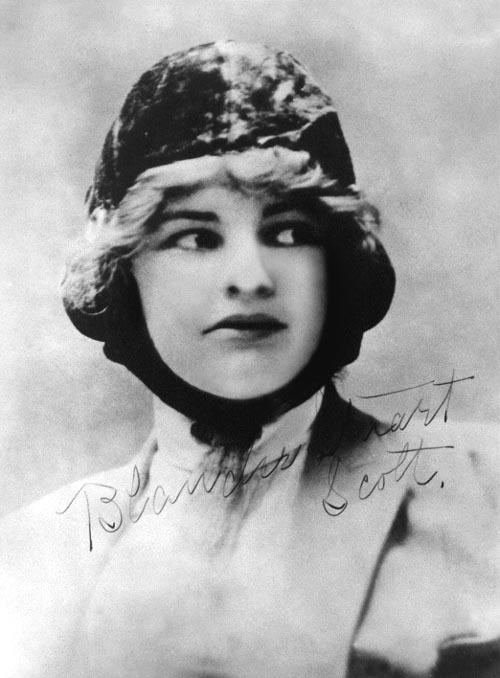