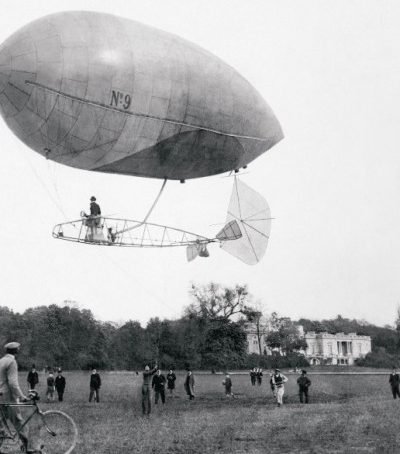 thank you for this article about travel 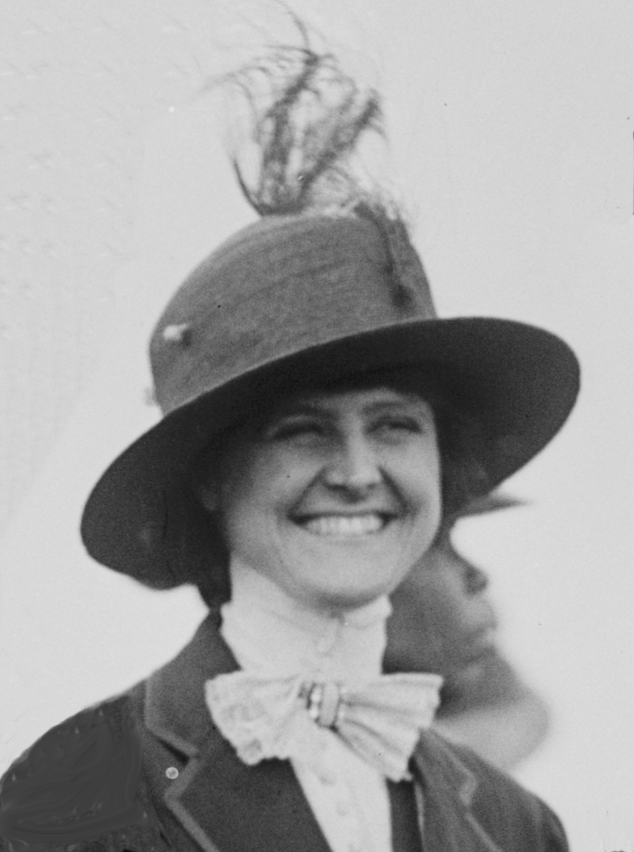 Researching Aida de Acosta was such a treat! What an amazing human being. Not only was she the first woman to pilot ANY type of motorized aircraft (a scandalous dirigible flight in 1903!), which she did a full 6 months BEFORE the Wright Brothers took their famous flight –  she ALSO founded the first United States eye institute and directed the first United States eye bank. Her life story is such an inspiration!

Aida in Paris with Santos-Dumont

Aida de Acosta was born in Long Branch, New Jersey in 1884 to parents of Cuban/Spanish decent. The family was well-known in the social circles of New York and often traveled to Europe for holidays. It was on a trip to Paris in 1903 that Aida came to meet the flamboyant Brazilian aeronaut Alberto Santos-Dumont – a meeting that left her with a secret she couldn’t reveal for almost 30 years! 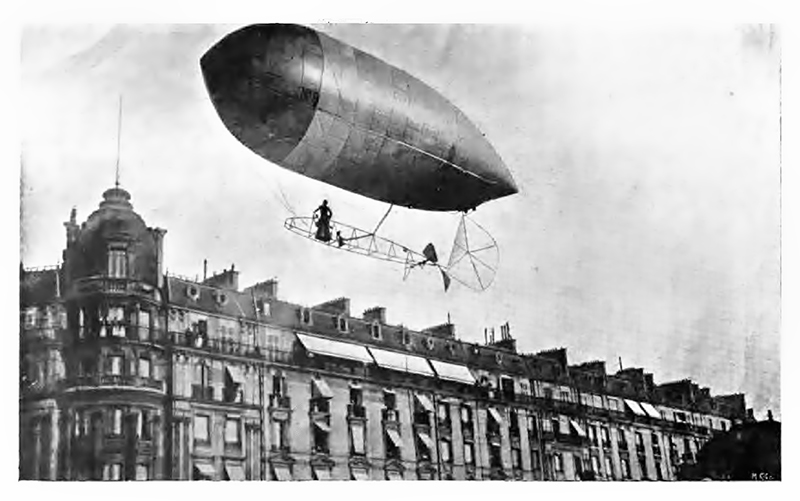 Alberto Santos-Dumont captured the imagination of the world with his balloons and motorized airships. In Paris, he was a common sight flying low over the rooftops and through the streets where he would tether his dirigible to a lamp post near his favorite cafe and order a drink. In 1901, he became one Paris’s most loved celebrities when he won the 100,000-franc Deutsch Prize for an 11.3-km (7-mile) flight with his airship No. 6 from the suburb of St. Cloud to the Eiffel Tower and back in less than half an hour. The victorious aeronaut then presented one-quarter of the purse to his crew and the rest to the poor people of Paris.

Aida was just 19 when she met Alberto in Paris. Santos-Dumont wrote that Aida de Acosta “was a very beautiful young Cuban lady, well known in New York society…having visited my station with her friends on several occasions, (she) confessed an extraordinary desire to navigate the air-ship.”

Alberto Santos-Dumont was so impressed with Aida that he agreed to teach her the mechanics of his beloved No 9 La Baladeuse (The Runabout) Zeppelin. He very much wanted the world to understand how easy it was to pilot one of his flying machines and Aida was the perfect protege. 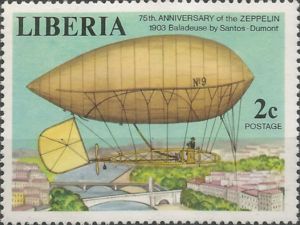 Aida’s training included learning the basics of steering the rudder with a lever for the propellers, shifting ballast as needed, and the all-important way to get airborne by dropping weights. It only took her 3 lessons before Santos-Dumont deemed Aida ready for her flight. Santos-Dumont decided to use his handkerchief to help relay signals to Aida while he followed along under the flying machine on his bicycle. “If I wave it with my right hand, you will turn toward the right, and so, on the left. If I wave it around in circles, you will make the motor go as fast as it can.”

And he added the most valuable safety measure – a length of rope tied to her wrist. She was to pull this rip cord attached to a panel on the gas bag if she should go too high or lose control. This would allow the machine to come down quickly. If she fainted, the rip cord would serve the same purpose. She was ready to fly!

June 29, 1903 was a beautiful and practically windless day in Paris. Many were outside enjoying the day and especially fans of the American and British polo teams who were playing that day in a field at Bois de Boulogne. Santos-Dumont and Aida decided this was the perfect day for a flight. They left the hangar with Aida in the basket and Santos-Dumont riding below on his bicycle giving directions onward toward the polo field. 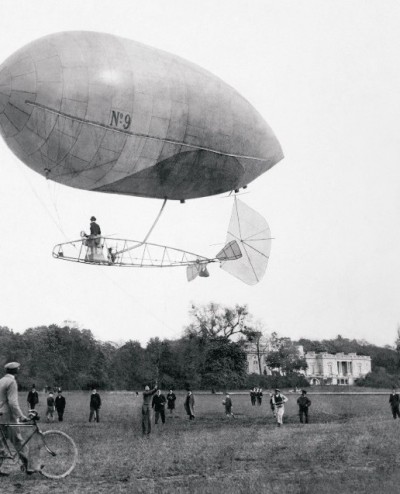 Aida must have been enchanted as the rooftops of Paris glided by while she fearlessly piloted the Zeppelin alone. All too soon she arrived at the polo field and gently set the aircraft down with help from those on the ground pulling the dragging guide rope. Santos-Dumont met her with a wild grin and asked how she’d fared. “It is very nice, Monsieur Santos-Dumont,” Aida said.

“Mademoiselle,” he cried, “vous êtes la première aero-chauffeuse du monde!” (You are the first woman aero-driver in the world!)

They watched some of the polo match together until it was time for her to get back in the basket alone and head back to the hangar. The entire trip took about one and 1/2 hours. Aida de Acosta flew Santos-Dumont’s aircraft alone from Paris to Château de Bagatelle and landed in the polo field. This was six months before the Wright Brothers’ first flight. Thus she became the first woman to pilot a motorized aircraft solo.

The Scandal that Followed

The press who were covering the international polo match immediately wanted to know more about the young lady who piloted the aircraft. Unfortunately for Aida, the excitement she must have felt was very quickly squashed when her mother heard of the adventure and the interest of the press. Aida was a girl of 19 who lived in the Victorian age where notoriety in the newspapers was not something a lady of social standing would seek in any form – except for her birth, marriage, and death.

Aida’s mother immediately went to Santos-Dumont and asked that her daughter’s name not be mentioned to the press or in any of memoirs, as this would cause a great scandal in the family. To prevent any further possibility of the family being dishonored, she quickly packed up and took Aida back to New York. Alberto Santos-Dumont agreed to do as she asked and faithfully kept his word. He only mentioned Aida by description in his book, My Airships, and never gave her name. 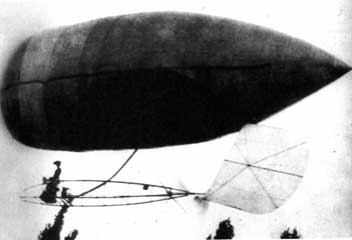 It wasn’t until almost 30 years later that Aida’s secret was revealed. She was hosting a dinner party in 1932 when a young naval officer spoke of his dream to fly a dirigible one day. Aida smiled and said, “I’ve flown dirigibles myself; they are a lot of fun.”

It was the first time she had ever revealed she was the girl who flew solo in 1903 Paris in the No. 9 La Baladeuse owned by the famous Alberto Santos-Dumont. There were a few photos of her taken that day, but until that moment no one knew who the mysterious woman was who became the first female to fly solo in a motorized flying machine.

Aida’s Contribution to Eye Care and Beyond

Aida de Acosta may have been keeping a big secret, but she certainly wasn’t idle. In 1922, after losing sight in one eye from complications of glaucoma, Aida became a champion and advocate for eye care in the United States. In 1925, she began a fund-raising campaign that resulted in $3 million to fund the establishment of the Wilmer Eye Institute at Johns Hopkins Hospital, becoming the first eye institute in the U.S.

But Aida didn’t stop there. After World War I ended, Aida de Acosta traveled back to Europe to work for the American Committee for Devastated France. In 1935, she was named chairwoman of the newly formed art committee of mayor La Guardia in New York City. By 1945, she became executive director of the Eye-Bank for Sight Restoration in New York, the first eye bank in the United States.

In 1908, Aida married Oren Root III, nephew of American statesman and Nobel Peace Prize laureate Elihu Root. They divorced in 1922. They had a son, Oren Root IV (1911-1995), and a daughter Alva de Acosta Root (born 1914 and named for suffragette-heiress Alva Belmont. In 1927, she married Colonel Henry S. Breckinridge. He was attorney to Charles Lindbergh during the Lindbergh kidnapping case, and assistant secretary of war under Woodrow Wilson. They divorced in 1947.

Aida de Acosta – socialite, philanthropist, and the first woman pilot died in Bedford, New York on May 26, 1962 at the age of 77.

The Flying Girl – How Aída de Acosta Learned to Soar – a children’s picture book about the inspiring true story of Aída de Acosta.

Be sure to check out the next Notable Flyer in Women Take Flight… Blanche Stuart Scott – 1st woman airplane solo flight and barnstormer extraordinaire!